It is a beautiful day in the Puget Sound region, so I don’t know how many people will be around here this evening. In any case, Nevada caucus results should come in sometime after 5:00 pm.

I should be able to do some commentary.

4:43: Turnout seems to be down in at least one county:

4:46: Live updates are supposed to be available at CNN. It isn’t working for me yet.

4:51: The most recent poll in Nevada that I’ve found is this one from PPP:

5:00: It’s five and CNN is still just showing a scenery shot with no audio.

5:06: With only Eureka County reporting results are (4% reporting):

5:09: Pershing County weighs in. Both counties combined. Romney stretches his lead over Gingrich, and Paul slips behind Santorum.

5:13: Now we have Churchill County. Romney strengthens his lead. Santorum spurts out ahead of Ron Paul.

5:54: Clark county has a large Mormon population. They make up 16%, so about 220,000 LDS residents. Expect Romney to do well when Clark reports.

On Monday I’m presenting my First Steps to Building a New Economy. Check back here, on FB, and my website then for details. #WaGov #WaLeg

I see Santorum has dumped the sweater vest for a bolo tie in CO. Isn’t this a flip-flop? Cue Romney ads.

We’ll have to see if Carl Ballard takes up bolo ties now, too.

6:12: Lincoln county reports, goes 80 something percent for Romney. The county is 70% LDS, but has a tiny population.

6:24: While we wait to find out who takes 2nd, 3rd and 4th, let’s look at the Obama—Romney polls in Nevada. Obama has been doing quite well in head-to-head match-ups, although Romney and totally leads in the most recent poll: 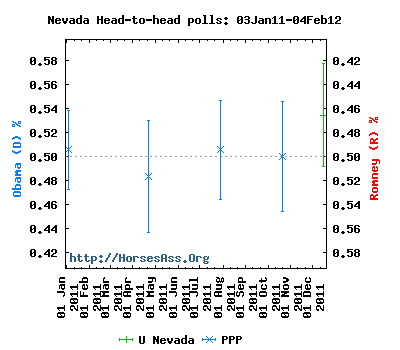 Here are the details:

6:32: With Carson City reporting, Gingrich has taken back second place from Ron Paul. Santorum is still stuck at the bottom:

6:35: Back to the poll discussion. Nevada was, essentially, a toss-up until the most recent poll. And that makes it lean toward Obama for the general election.

6:41: White Pine county weighs in. Not many precincts, but Romney pushes forward…Santorum is pushed further behind.

6:47: Via KOMO: “Official: Dog starts Vancouver, Wash., house fire.” Hmmm…was it an Irish Setter name Seamus, by any chance? I’m guessing he saw Mitt on TV and had a PTSD relapse. It was a suicide.

6:56: Man…it is sure taking awhile for the two big counties to report. I’ve got steaks to grill, dammit!

7:40: Washoe county—2nd largest in the state for precincts—has 15% reporting and Gingrich is up big time! If the results hold for the rest of the precincts (and they probably won’t), there will be some drama. At least until Clark county reports.

8:00: All precincts are in except for Lyon and Clark counties and still only 15% in Washoe (oh…and some from Lander and Nye to come). In other words…still 83.4% that have yet to report.

8:27: Nye county just went 100% on us. Results are almost indistinguishable from 4 minutes ago.

8:33: Still nothing from Clark county (w/Las Vegas). Must still be busy taking bets on how they will vote….

8:35: There is NO truth to the rumors that the Las Vegas caucus goers got distracted by slot machines set up at each caucus location.

8:44: Man…Nevada Republicans are sure having a difficult time with their caucus (or at least counting the results). Some of the results have even been changing. On the other hand, at least they are reporting county-by-county results. Remember what a clusterfuck the Washington state G.O.P. caucus was in 2008?

11:51pm: Huh…here it is almost tomorrow on the west coast and all we have is 5.8% of the results from Clark county. Only 44.9% of precincts have been reported. Not sure what the big delay is, but here is the bed-time total.