The previous analysis of the contest between former Vice President Joe Biden and President Donald Trump was just two days ago. There have been 73 new polls released since then. I usually expect polls to show a tightening race just before the election. Indeed, there are hints of this in the states you expect Trump to win, but show Biden the lead (like AZ, FL, and NC). Texas has tightened so that Trump now has only a very small lead. Iowa has also tightened, cutting into Biden’s lead, leaving a very close race. Regardless, there has been little overall change in the race.

In past analyses, I have been using polls taken in the past month as “current polls.” For today’s analysis, I have tightened up the “current poll” window because there are many polls being released and old polls may be less representative of the electorate. Now, the analyses consider only polls taken over the past three weeks as “current.” As it happens, the overall trends don’t change much by doing this, but Biden gets a “recent polls” bump out of this. The other way to think of it is this: Biden’s lead was being dragged down a bit by polls taken three to four weeks ago.

The long term trends in this race can be seen from a series of elections simulated every seven days using polls from 30 Oct 2019 to 30 Oct 2020, and including polls from the preceding 21 days (FAQ). 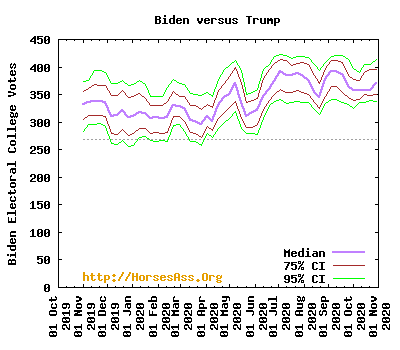 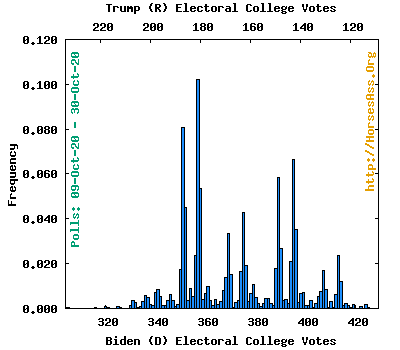