Today, after 100,000 simulated elections, Democrats have a Senate majority 99,919 times, Republicans control the Senate 21 times, and there were 60 ties. In other words, the results for Democrats have improved a bit, with the average number of seats going up by one to 54. Democrats would almost certainly take control of the Senate if the race was held today.

This week, we got the first polls in several races, including Tennessee, Oregon, Massachusetts, and the Georgia-2 special election. In fact, that poll is largely responsible for the one-seat bump from last week. Georgia’s special election has no primary. Instead numerous candidates will be on the ballot on November 3rd, and a runoff election will be held in the almost certain event that no one candidate takes 50% of the vote. The Civiqs poll conducted heat-to-head contests between different combinations of candidates. At this point it looks like the runoff is between Democrat Raphael Warnock and Republican Senator Kelly Loeffler, who holds the seat by appointment. The poll puts Warnock up over Loeffler 49% to 39%. Of course, this is only one poll, and an unconventional one at that, but it has totally changed my perception of this race, which I assumed would go to the incumbent Republican.

Democrats make progress in several other races, as well, including the GA-1 Senate race (from 16% probability last week to 33% probability of winning the state in an election held today), Iowa (45% to 70%) and Montana (30% to 43%). Republicans gained in Kansas (from 50% to 82%). I should note that only a few of the twenty North Carolina polls were taken (or partially taken) after Democrat Cal Cunningham’s “sexting” scandal broke. We’ll need more polls to see how that race develops. 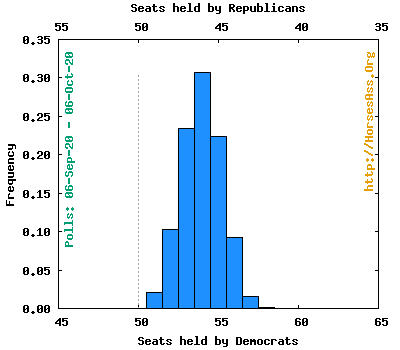 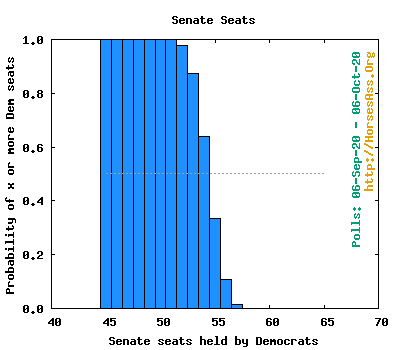