I suppose it is about time for some analyses of the 2020 races for the U.S. Senate. As with the presidential state head-to-head polls, I’ve been collecting senate head-to-head polls for senate races. We now know the general election candidates in all races except the Georgia 2 special election and the Louisiana senate race, but we’ll be assuming that the Republican incumbents will eventually win these races.

Although these analyses are for each state in which there is a senatorial election, we will aggregate the results to look at the probability that the Senate will remain in the hands of the Republicans or flip to the Democrats. Of course, the third possibility is a 50-50 tie, in which case the outcome of the presidential election determines which party controls the Senate. Given the strength of former Vice President Joe Biden’s lead over President Donald Trump, I’ll assume ties go to the Democrat, although occasionally I’ll report both ways. Perhaps later on, I’ll change the reporting to systematically include results each way.

As of this afternoon, I’ve collected 361 head-to-head polls in the senate races. For some state there are many polls, like the 66 polls for the N.C. senate race between Republican Sen. Thom Tillis and Democratic candidate Cal Cunningham. For other states, there are not so many polls—like zero polls in Delaware, Massachusetts, Oregon, Nebraska, among others. Idaho and Illinois have only one poll each, and New Jersey only has two polls. Clearly, some states have few, or no, polls because the race isn’t particularly competitive. States with many polls are either competitive, or are interesting for some other reason—perhaps there is a gubernatorial race or it is an important toss-up state in the presidential race. For North Carolina, both are true. When I have no polling in a race, the incumbent wins the state for each simulated election.

Even with 361 polls, I will always use a subset of the most current polls. Right now, my rule is to use polls taken over the past month, but that window may tighten as Nov. 3 approaches.

Let’s get on with it! After 100,000 simulated elections, Democrats have a Senate majority 97,022 times, there were 2,936 ties, and Republicans control the Senate 42 times. By this analysis, if the election was held today, Democrats would have a 100.0% probability of controlling the Senate. If we have a Republican Vice President, the probability drops to 97% for Democrats and 3% for Republicans.

There is only one state likely to go from Democrat to Republican, and that is Alabama. Tommy Tuberville (R) has led in all 7 polls ever taken in this race, and he is likely to unseat Sen. Doug Jones.

There are three states likely to flip from Republican to Democrat: Arizona, Colorado, and North Carolina. In Arizona, former astronaut Mark Kelly (D) has led Sen. Martha McSally (R) in all 15 polls taken in the past month. He has led in almost all of the 66 polls taken in this race going back to early last year.

In Colorado, former Governor John Hickenlooper has led in all eleven polls taken in this race going back to Aug 2019. Many of the polls showed a double digit lead for Hickenlooper.

And then there is North Carolina, where Cunningham (D) has led Tillis (R) in all 21 polls taken in the last month—one of the polls is a near tie with Cunningham up 322 “votes” to 320. We have to go back 43 polls, all the way back to June to find a poll where Tillis leads Cunningham, but only by a single “vote”: 474 to 473. Cunningham leads in a majority of older polls going back to June of 2019.

In the toss-up category, we have a surprising number of states: Alaska, Iowa, Kansas, Mississippi, and South Carolina. In Alaska, the most recent poll is tied, but the two older polls had Sen Dan Sullivan (R) leading Al Gross (D). The most recent poll in Iowa is also a tie, but going back to June, Sen Joni Ernst (R) has only carried two polls while her challenger Theresa Greenfield (D) has led in 10 polls.

In Kansas there is also a tie in the most recent poll. But Roger Marshall (R) has led Barbara Bollier (D) by 1% margins in the three polls taken since June. Mississippi is a surprise tie. Sen Cindy Hyde-Smith (R) is being challenged by Mike Espy (D). The only current poll has Hyde-Smith up by 1%. There were 5 previous polls, all taken before June, where Hyde-Smith had a solid lead. We definitely need more polling in Mississippi!

South Carolina is one of the most interesting of the senate races. Sen. Lindsey Graham (R) is being challenged by Jamie Harrison. Graham led Harrison through March, but since then, there have been three ties, Graham has had (mostly) small leads in 5 polls, and Harrison has had a small lead in one of the most recent polls.

Finally, the Georgia race between Sen. David Perdue (R) and Jon Ossoff (D) is close enough to merit mention. Perdue has led in the most recent five polls, but there were two ties, and Ossoff led in one poll before that, all within the last month. Perdue has the momentum for now, and the simulated results give him a 84% probability of keeping his seat. 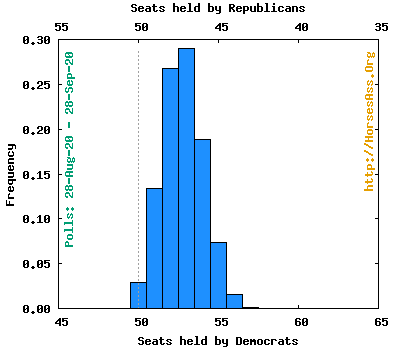 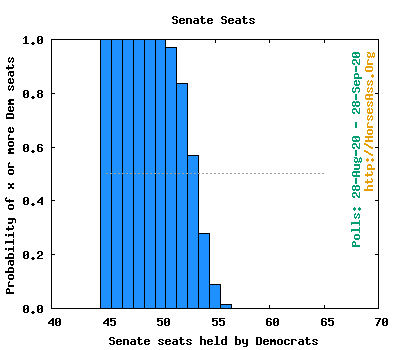