My analysis last Wednesday showed former Vice President Joe Biden with a solid lead of 380 to President Donald Trump’s 158 electoral votes. There have been 55 new state head-to-head polls to weigh in on this race. Also, I’ve corrected a typo in a Florida poll that, combined with other polls, skewed the state slightly toward Biden (see the discussion in the comment thread for more information).

Today, after 100,000 simulated elections, Biden wins 100,000 times and Trump wins 0 times. Biden received (on average) 377 to Trump’s 161 electoral votes. In an election held now, Biden would have a greater than 99.9% probability of winning and Trump would have a less than 0.1% probability of winning. This shows Trump gaining very slightly. Trump’s gains primarily came from 4 states:

Biden has seen some gains, as well, in five states and two congressional districts:

The long term trends in this race can be seen from a series of elections simulated every seven days using polls from 28 Sep 2019 to 28 Sep 2020, and including polls from the preceding month (FAQ): 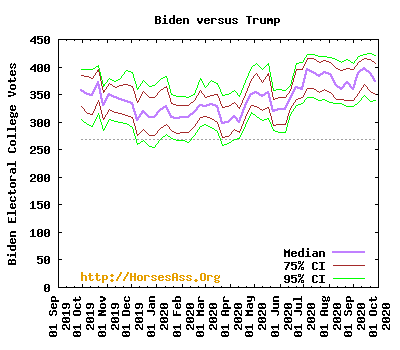 Back to the current analysis, here is the distribution of electoral votes [FAQ] from the simulations: 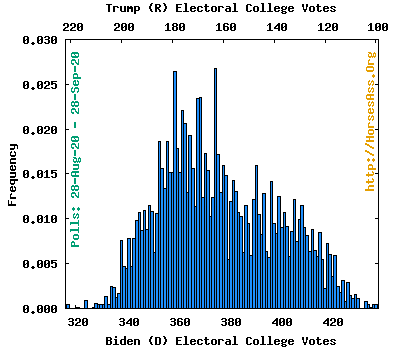