Exodus 21:22-25
Suppose a pregnant woman suffers a miscarriage as the result of an injury caused by someone who is fighting. If she isn’t badly hurt, the one who injured her must pay whatever fine her husband demands and the judges approve. But if she is seriously injured, the payment will be life for life, eye for eye, tooth for tooth, hand for hand, foot for foot, burn for burn, cut for cut, and bruise for bruise.

Lee Camp: Hell frozen over? A CEO is jailed!

PBS & NPR: Are pesticides to blame for the massive bee die-off?

Minute Physics: Why isn’t it faster to fly West?

Pap: Corporate media wants you to be stupid. Let’s fight back.

Thom with Steven Gaffney: Really! How do you know a politician is lying?

Farron Cousins: Corporate media is hungering for a war.

Actual Terrorism That Happened in the U.S. This Week:

Thom: The Good, the Bad & The Very, Very Gallionicly Ugly!

Young Turks: Koch brothers building their own CIA to spy on progressives.

David Pakman: More Mexicans are leaving U.S. than coming in to the U.S.

Mental Floss: What’s the difference between American and Canadian Thanksgiving?

This afternoon, King County Elections will certify the November 3 results with Lisa Herbold holding a 30-something-vote lead in the closely contested District 1 race. There will be an automatic manual recount, but don’t expect the margin to change by more than a vote or two at most. KCE pre-inspects ballots, duplicating those it expects might have trouble scanning, and previous recounts have routinely shown little or no change from the first count.

Congratulations to Herbold, and my sympathies to Shannon Braddock for what must be a heartbreaking loss.

Back when Braddock had a comfortable election night lead and it was Kshama Sawant’s D3 race that looked uncomfortably close (she eventually won by 12-plus percent), there was a rush by some pundits and politicos to judge the election cycle as a loss for Sawant and her socialist/labor alliance. But with Herbold replacing her ultra-liberal boss Nick Licata on the council, the current 6-3 split on the council remains intact. At least.

For the question of who really won this cycle will be answered in the new year, when the issue of 12 weeks parental leave for city employees is inevitably again raised before the council. Yesterday, the proposal went down to defeat, with Sawant, Licata, Mike O’Brien, and Bruce Harrell voting for it. Sally Bagshaw, who voted yes in committee, switched her vote to no before the full council. I’ll leave it to others to speculate on her motives.

But next year, four newly elected council members will have the opportunity to weigh in. If the new council approves 12 weeks parental leave, that will indicate a further shift to left left. If the proposal fails by the same 4-5 margin, that will indicate status quo.

Every member of the council thinks of themselves as progressive. The truth will be in their votes.

The past week in politics has been absolutely crazy. Conservatives have developed bladder control issues as they cower at the thought of refugees coming into the U.S. Some Washington State lawmakers joined right in on the public display of cowardice. A leading Presidential candidate has been spewing incredibly racist lies, apparently to stoke his base. And that just touches on the week’s wackiness.

Please join us for some sane political conversation over the beverage of your choice at tonight’s Seattle Chapter of Drinking liberally.

We meet tonight and every Tuesday at the Roanoke Park Place Tavern, 2409 10th Ave E, Seattle. You’ll find us in the small room at the back of the tavern. Things start up at about 8:00 pm.

Can’t make it to Seattle tonight? Check out one of the other DL meetings happening this week. Tonight the Tri-Cities chapter also meets. On Wednesday, the Burien chapter meets. And the Woodinville, Spokane, and Kent chapters meet on Thursday.

Back in March, when I welcomed Paul Constant to our then-unnamed policy/messaging shop, I joked about our boss’s weird hobby:

Hanna has a number of freelance bylines at The Stranger and elsewhere, though she’s certainly best known to local readers as one of the forces behind the popular tumblog, Seattlish. Mostly, Hanna will be heading up a top-secret internal Civic Ventures project, but she’ll also contribute regularly to our Civic Skunkworks blog. In fact, her first Skunkworks post just went live today: “It’s Too Soon to Tell if a Higher Minimum Wage is Eliminating Restaurant Jobs.” Give it a read, and then pretty much ignore just about every headline you see on the so-called “early” impact of Seattle’s minimum wage.

So welcome to Civic Ventures, Hanna. Now let’s all go out there and change the world… you know, hopefully for the better.

1 Timothy 5:23
Stop drinking only water, and use a little wine because of your stomach and your frequent illnesses. 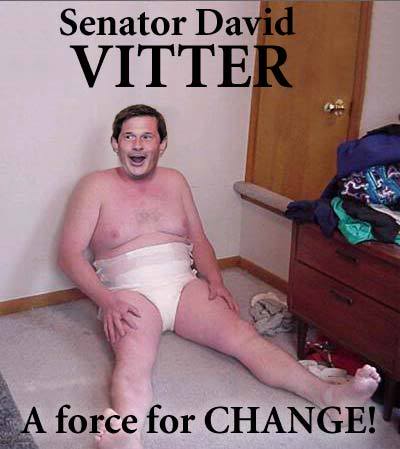 Vitter is infamous for a 2007 sex scandal when his phone number was among those found in the “D.C. Madam’s” phone book. Vitter responded to the scandal by offering an apology with his wife, Wendy, by his side, in what might be the most awkward political moment in history. And he refused to resign.

The moniker “Diaperman” is from reports that the Senator enjoyed diaper play with at least one prostitute.

Despite the scandal, Vitter was reelected to his U.S. Senate seat in 2010. This year he ran for Governor.

This race has a number of implications. First, it means that the Democrats have won back a Governor’s seat. Bobby Jindal (R) has been the Governor since 2008, but must step down on account of term limits. Jindal ran for the G.O.P. presidential nomination for 2016, but dropped out this past week.

The second big implication has to do with Vitter’s Senate seat. Vitter can run for reelection to the U.S. Senate. But tonight Vitter announced he will not run for reelection. Furthermore, he said he will fulfill the last year of his Senate term.

The implications for this are huge. If Vitter resigned now, Jindal would be able to appoint a replacement who would, effectively, be an incumbent for 2016. But Vitter and Jindal hate each other, so Vitter will not give Jindal the opportunity to pick a successor. The result is that the U.S. Senate 3rd class seat for Louisiana will be an open race in 2016.

In my recent analysis of the Senate race, Democrats would most likely win 49 seats if the election was held now. That analysis assumed that (1) Vitter would lose the gubernatorial race, (2) Vitter would run as the incumbent for his seat, and (3) he would win with 100% certainty.

Now we know that will not happen. Instead there will be an open seat in Louisiana for 2016. It is too early to tell who the candidates will be. Both sides have potential strong candidates, but none have declared yet. We do know that the strongest candidates on each side, Bobby Jindal (R) and Mary Landrieu (D), have declined to run. Maybe they will reconsider.

I usually stay away from predictions, but I’ll offer a conditional prediction here. If the Democrats manage to reach at least 50 seats in 2016, it will be because Louisiana elected a Democrat to the Senate.

The adventures of Young Hillary: One Woman Play.

Congressional Hits and Misses of the week.

Mental Floss: Misconceptions about the brain.

Farron Cousins: Is there any group the FAUX News doesn’t hate.

Stephen: You know nothing, Barack Obama.

The adventures of Young Hillary: Teaching the less fortunate.

So, I was searching for a high capacity rugged USB thumb drive, and now this Amazon ad keeps following me around the Internet: 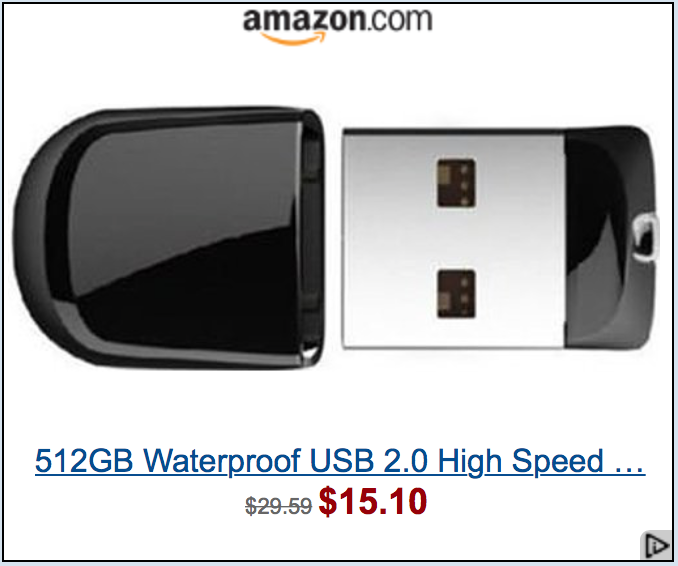 Wow! A tiny form factor waterproof 512GB USB thumb drive for only $15.10? That’s a fraction of the size of a similar capacity drive from a name brand manufacturer, at less than one twentieth the price! It’s gotta be too good to be true, right?

Of course it is. It’s a scam. And it’s not the only one. Amazon’s search pages are actually stock full of ads offering high-capacity drives at literally impossible prices, and if  you click through, you’ll usually find helpful reviewers warning you off… typically scattered among a bunch of scam reviewers touting a “great product!”

No, this particular scam drive isn’t shipped directly by Amazon—but this one is. And Amazon is directly advertising these fakes both on its website and in ads like the one above, making it complicit in the scam. And in so doing, Amazon is surely fooling loyal customers by lending these ripoffs the credibility of its valuable brand. Makes you wonder if you can trust any bargain you find on Amazon? And if it doesn’t, it should, because if it’s happening with USB thumb drives, it’s surely happening in many other product categories.

And no, Amazon isn’t a victim here. The company has spent kajillions developing AI designed to sell us more stuff, so it’s certainly capable of developing technology that flags impossibly priced merchandise as potential scams.

Just imagine the scandal if Walmart was found stocking its shelves with fake discount merchandise, possibly knowingly? So why isn’t this a scandal when it’s happening at America’s largest online retailer?

Anyway, consider this post a free tip to ambitious investigative journalists, attorneys general, and class action lawyers. Because my Goldy senses tell me there’s a lot more to this scam than one impossibly priced fake 512GB drive.