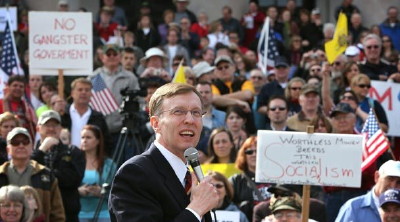 Some folks might be alarmed by the arrest of a Selah, WA man for repeatedly threatening to kill U.S. Senator Patty Murray in response to her vote for health care reform, but really, nobody should be surprised when the most unhinged elements of our far right have been egged on for months by their fellow Teabaggers, by hate-talkers like Glenn Beck and Sarah Palin, and even by Republican elected officials.

Demonize your opponents too thoroughly, vocalize your call to arms too literally, and somebody is bound to act. When Sean Hannity lauds the “Tim McVeigh wannabes” to raucous applause, or an Asotin Teabagger gathering breaks into peals of laughter at the mention of hanging Sen. Murray, well what’s a patriot like Charles Alan Wilson to think? This is clearly acceptable rhetoric in Republican circles today, so why wouldn’t it be acceptable behavior?

“I do pack, and I will not blink when I’m confronted. … It’s not a threat, it’s a guarantee,” Wilson told an FBI agent posing as a representative of the health insurance industry-backed anti-reform group Patients United Now. Wilson himself may no longer be a threat, but there’s no reason to believe he’s the only angry, concealed-weapon-toting winger out there eager to make himself a martyr to the cause of liberty, and the next one might not be so courteous as to provide the FBI a traceable record of threatening phone calls in advance.

U.S. Senators and Representatives do not generally travel with security, so it wouldn’t be too hard for even a modestly determined armed assassin to get to Sen. Murray, especially during a campaign-stop-heavy election year… a morbid thought that occurred to me just last week as I stood a mere ten feet away from two Senators, two Representatives and a Governor who had no idea whether that lump in my jacket was a video camera or a gun. (For the record, it was the former.) So while Wilson’s threat should come as no surprise considering his party’s hopped up level of partisan rancor, neither should an actual attempt.

In this context I wonder at what point allegedly mainstream politicians like Dino Rossi and Rob McKenna will stop fighting amongst themselves for the Tea Party mantle, and start condemning the hateful, violent rhetoric that fuels its base? A little more than a week ago McKenna basked in the glory of a Teabagger rally that vilified Democrats as “gangsters,” “socialists,” “fascists” and worse. McKenna’s mere presence was a tacit approval of the hateful signs being waved in front of him, and while his own words may have been carefully chosen he said nothing to condemn those that were not.

You know… the kinda words that inspire the likes of Charles Alan Wilson to murder a U.S. Senator.

I started this post intending to challenge Rossi and McKenna to condemn the violent and dangerous rhetoric of the Tea Party — an angry rabble that clearly fantasizes themselves armed revolutionaries by the very name they adopt — but the more I consider this incident and what it portends, the more I’m willing to let them off with just this warning: there will be violence, and if it comes at the hands or the goading of the far-right-wing base you court, you will be morally culpable for the political cover you have provided.

And that, I hope, is a calculated political risk even Dino Rossi and Rob McKenna wouldn’t be willing to take.