Several weeks ago I gave an account of my niece Maria’s struggle to get a Wisconsin state ID card so that she could vote under Walker’s stricter ID voting laws. She made three trips to the Department of Motor Vehicles office and on the third trip they rejected one of her IDs—her birth certificate—because it didn’t clearly distinguish her middle name(s) from her last name(s). That she had two other forms of ID didn’t make any difference.

I mentioned in the comment thread that a memo was uncovered in which a top administrator directed DMV employees to NOT inform people that these IDs were free. There has been speculation that there is a more sweeping directive to obstruct people from obtaining these IDs in other ways as well.

It seemed pretty clear to me that Maria was a victim of some kind of obstruction. I don’t know if the employees were targeting everyone trying to get a free state ID or whether Maria, a young Hispanic woman with a disability, who produced a student ID as one of her three IDs, fit some profile of people for exclusion.

Either way, the results are identical—disenfranchising likely Democrats. The people who have no driver’s license are more likely to be at the margins of society: the young, the elderly, the poor, those with a disability, students, the unemployed, and so on.

The story continues. Last week, Maria’s mother (my sister) had some time off from work, and could personally transport Maria to the DMV during business hours. She had an idea…something to try before going through the trouble and expense (and possibly the legal procedures needed) to obtain a birth certificate that clearly specified whether her first (middle) and last names were “Maria (Elaine) Valdez Holman” or “Maria (Elaine Valdez) Holman” (…as if there is some big fucking ambiguity there).

The DMV office that Maria previously visited was on Madison’s west side. That would be the more well-to-do, lily-white side of town. Perhaps, my sister reasoned, Maria would have better “luck” going to the east side DMV. The east side of Madison is much more culturally, ethnically, and socioeconomically heterogeneous.

So last week she takes Maria to the east-side DMV. Maria got her ID with no difficulties whatsoever. No problems with the birth certificate. Indeed, they gave a cursory glance to her three IDs and got down to business. Mission Accomplished!

Maria was lucky. She is a determined young woman. She is particularly determined to vote against Gov. Scott Walker. So she got her ID through brute force perseverance.

Other people in a similar situation may not have the motivation, the time, the resources, the luxury to make four trips to the DMV, just to meet new bullshit administrative hurdles required to vote later this year. 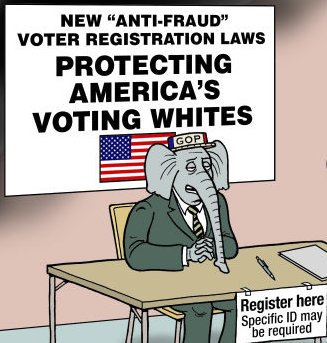 I’m happy for Maria. I’m sad for my beloved Wisconsin. I’m ashamed for what the Republicans have done to her. A video of the experience of another Madison mother trying to get her son a voting ID (and some answers) can be seen here.

Since this is a Washington state blog…let me bring it home by repeating my warning: A Governor Rob McKenna will take actions to disenfranchise the Marias of Washington state.

McKenna, and the Washington state Republicans, have never gotten over the 2004 election. They are convinced the Democrats stole the governorship from them by systematic voter fraud. For them, Washington state is the the number one example of unchecked, rampant election fraud. And Governor McKenna will do something about it.

Seriously…if Washington state gets a Republican Governor Rob McKenna, what do you think the chances are that our voting laws and rules will continue without some sort of assault?

I hope the people and the press fully vet McKenna on “his” ideas for changing our voting systems before next November.