Because relatives are visiting from New York this week, the cellulose-based legacy media is finding its way into my house. I spotted this interesting introduction to an Op-Ed piece by Flynt Leverett and Hillary Mann in today’s New York Times:

HERE is the redacted version of a draft Op-Ed article we wrote for The Times, as blacked out by the Central Intelligence Agency’s Publication Review Board after the White House intervened in the normal prepublication review process and demanded substantial deletions. Agency officials told us that they had concluded on their own that the original draft included no classified material, but that they had to bow to the White House.

These aspects have been extensively reported in the news media, and one of us, Mr. Leverett, has written about them in The Times and other publications with the explicit permission of the review board. We provided the following citations to the board to demonstrate that all of the material the White House objected to is already in the public domain. Unfortunately, to make sense of much of our Op-Ed article, readers will have to read the citations for themselves. 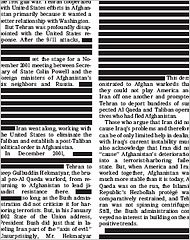 The term redacted is, of course, a euphemism for censored. The Times printed the Op-Ed with the censored sections of text blacked out.

Why the White House feels so threatened by a series of facts contained in the original draft—all drawn from public sources— that they would engage in such gratuitous censorship is beyond me.

I suppose it could be because the article documents how Bush double-crossed Iran after a period of fruitful cooperation in the early years of the war in Afghanistan. I suppose the White House was a little miffed by being exposed as squandering opportunities to get Iran’s help in fixing the Iraq civil war quagmire. But neither of these reasons justifies government censorship of the press or the free speech rights of the authors. It is clear from numerous sources—the censored Op-Ed, the authors’ statement, the statement of CIA Publication Review Board, and the cited sources—that the Op-Ed contained no classified information or information that compromised national security.

Simply put, the only rationale the White House had for censoring this article was to save the Administration a little embarrassment. And that is outrageous. Every American, regardless of political persuasion, should be alarmed by the realization that the White House even bothers to intervene in newspaper Op-Ed pieces, not to mention that they gratuitously censor embarrassing material.