Goldy recently wrote about the signs of gloom and doom for the Republicans. The bad new and “expectations management” continues. Just look at a couple of the articles that hit the press this weekend:

Politico has the headline GOP getting crushed in polls, key races:

In case you’ve been too consumed by the Democratic race to notice, Republicans are getting crushed in historic ways both at the polls and in the polls.

In the polls, they are setting records (and not the good kind). The most recent Gallup Poll has 67 percent of voters disapproving of President Bush; those numbers are worse than Richard Nixon’s on the eve of his resignation. A CBS News poll taken at the end of April found only 33 percent of Americans have a favorable view of the GOP — the lowest since CBS started asking the question more than two decades ago. By comparison, 52 percent of the public has a favorable view of the Democratic Party.

Things are so bad that many people don’t even want to call themselves Republicans. The Pew Research Center for the People & the Press has found the lowest percentage of self-described Republicans in 16 years of polling.

It’s hard to dismiss this stuff as “liberal media bias” when elections hand districts (with decades of Republican-control) to the Democrats. The article even has a Republican insider saying:

“The anti-Republican mood is fairly big, and it has been overwhelming,” said Michigan Republican Party Chairman Saul Anuzis.

That’s bad. I mean, at some point even the most heroic self-deception must fail, even in a community that is infamous for rejecting reality and facts.

The Republican gloom and doom is featured in this piece appearing in The Weekly Standard titled Gloomy Republicans: For good reason? by Executive Editor (and noted Wingnut) Fred Barnes:

First, the good news. Conservatives won a sweeping victory in an enormously important election the week before last. Unfortunately, it happened in England….

Alrighty then…. That’s the (totally irrelevant) good news. The bad news is that…

Prospects for Republicans in the 2008 election here at home look grim.
[…]

More than 80 percent of Americans believe the nation is heading in the wrong direction. Democrats have steadily maintained the 10 percentage point lead in voter preference they gained two years ago. And President Bush’s job performance rating is stuck in the low 30s, a level of unpopularity that weakens the Republican case for holding the White House in 2008.

There’s another piece of polling data that is both intriguing and indicative. In a Wall Street Journal/NBC survey last month, John McCain fared better with Republican voters (84 percent to 8 percent) than Barack Obama did with Democrats (78 percent to 12 percent). McCain was also stronger than Obama among independent voters (46 percent to 35 percent).

These are terrific numbers for McCain. But they aren’t enough. In the overall match-up, McCain trailed Obama (43 percent to 46 percent). The explanation for this seeming paradox is quite simple: The Republican base has shrunk. In 2008, there are fewer Republicans. [Emphasis added]

This same pattern holds here in Washington state. In the most recent SurveyUSA Washington head-to-head poll, Sen. John McCain gets 87% of the Republican support compared to 83% of Democrats who support Sen. Barack Obama. (One difference is that among Washington state independents, 55% support Obama and 34% support McCain.)

Overall, however, Obama strongly leads McCain, 53% to 40%. The reason for the double-digit lead is that only 28% of those polled admitted to being a Republican, whereas 41% fess-up to being a Democrat.

SurveyUSA polls provide data on the long-term trend in party affiliation. Here are the percentages since May of 2005: 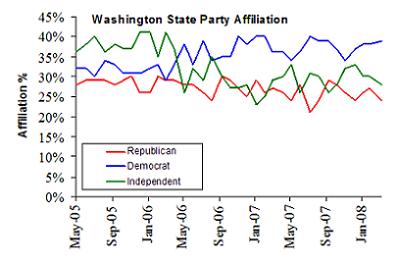 The numbers show a slight decline of about 1.4% per year in Republican affiliation. At the same time, there is a 2.7% increase per year in Democratic affiliation. The big change is in independents, who have declined by about 4% per year.

The take-home message is that Republicans have good reason to be gloomy in Washington state. Their brand name is tarnished; the percent of Washingtonians admitting to being a Republican is declining. At the same time Democrats are experiencing growth.

And if Republicans are counting on independents to make up the difference, they are bound to be bitterly disappointed: there are even fewer independents than there were three years ago as former independents start calling themselves Democrats.