I stumbled across this article today:

Woodinville’s Tourist District Roundabout Transportation Improvement Project received an engineering excellence award from the Washington State Chapter of the American Council of Engineering Companies (ACEC). The award was presented to the Woodinville City Council on February 8.

The roundabout project won a gold award in the category of exceeding client/owner needs. […]

A number of other national professional engineering groups have also recognized Woodinville’s project for its innovative use of three roundabouts. […] 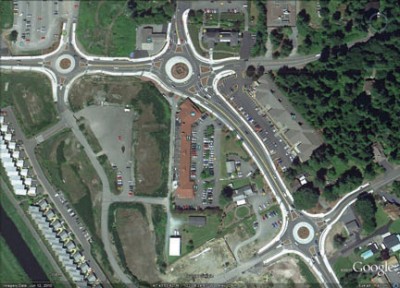 What drew my attention is that I use this bit of road at least several times a month. It reminded me that I been meaning to post a RANT about Washington drivers and their seeming inability to use roundabouts effectively.

Before I take up a menacing stance upon my mighty soapbox, let me first add to the praises of this project. For many years now, I have made almost weekly trips from my home in Redmond to Snohomish. I take SR 202 (or the Redmond–Woodinville road) to Woodinville and then pick up SR 9 to Snohomish. The intersection of SR 202 and Northeast 145th, was sometimes a mess. During rush hour, SR 202 used to back up for a mile or two. But even during low traffic periods, the intersection of roads at odd angles, combined with the particular traffic flows rendered an annoyingly low throughput at this intersection. According to this 2006 Seattle Times article, people have been trying to find a fix for this problem since the 1970s.

Roundabouts were the answer. Not those wimpy little traffic calming circles that one finds all over Seattle. These are real (if smallish) traffic roundabouts. About a year ago, they finished the project that consists of one main 2-lane roundabout. And there are two satellite roundabouts (see image) that, in part, serve to slow traffic down and permit a smaller main roundabout footprint.

My assessment: Fantastic! The one-way time between my house and my destination in Snohomish was reduced from 40 minutes to just under 35 minutes. Also the variance in trip time was reduced. Essentially, getting through the SR 202/NE 145th intersection is now both faster and accomplished in about the same amount of time each trip. I truly love these things.

What annoys me about roundabouts is the stupid-ass drivers who have no idea how to use them effectively. There are some simple tricks that, when everyone is in on it, makes them much more efficient. So, at the risk of being dubbed “The Traffic Nazi” by someone other than my significant other (Happy Valentines day, dear!), allow me to offer some advice to the traffic circle novice.

Whew! I’m glad I finally got that off of my chest.