Last Saturday (April 28th) was a day filled with pro-impeachment events in over 125 locations in the U.S., and even a few locations overseas. The nationwide impeachment protests were organized by A28.org, and consisted of many types of public display of free speech. Here is an example from Madison Park in Seattle:

One of my favorite forms of this type of exercise in free speech is the posting of signs along the freeway. And the foremost proponent of this technique is Scarlet, a.k.a. The FreewayBlogger, who has personally posted over 4,000 such signs. (I believe it was Scarlet who first used the word “Chimpeachment.”)

Here is FreewayBlogger’s collection of freeway blogging from the April 28th Impeachment Event.

Locally, the Backbone Campaign has been busy placarding in Seattle for some time. They’ve recently had a showdown with the police, but it appears that the police backed down. I’ve not heard of any police-related incidences from this weekend.

The fact is, this is generally considered free speech protected by the first amendment. But, state and local laws may restrict where signs can be placed. Here’s an easy way to find out what is legal in your area:

It is your right as a citizen to display non-commercial signs and banners, with some exceptions. Rules regarding signposting along roadways vary from state to state, and locality to locality. So, call your local department of transportation to find out more. Ask for public relations and say you’d like to put up some American flags and “Support the Troops” signs… they will likely be more than helpful. Don’t feel bad if that’s not precisely what you intend to put up: this is America, and the rules apply equally to all points of view.

And Scarlet offers these defiant words of inspiration:

It is our contention that the town square of colonial times has now become the interstate: for better or for worse, that’s where all the people are. With this in mind, we feel it is our God-given and constitutionally-granted right to post our messages on the interstates, freeways, or wherever-the-hell-else-we-think-people-will-read-them and we’re willing to fight for this right all the way to the Supreme Court.

But you’ll have to catch us first.

Interested in doing you own freeway blogging? As can be seen in his video the making of signs is extremely easy. For about a buck per sign, you too can reach 100,000 readers a day! 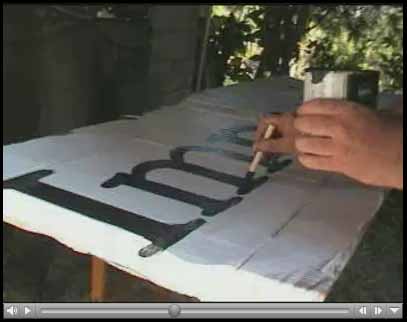 The really fun part comes after you make the signs. “Picking locations for signs is something of a chess game,” Freeway Blogger told me last July when he showed up at the Seattle gathering of Drinking Liberally. I’ve been saving large pieces of cardboard ever since….