The 6th batch of R-71 data was delivered this morning. The SoS office is pooling numbers from the morning and evening counts, but I’ll treat them separately just so that we can look for big swings in the “semi-batches”. Also, the SoS totals don’t seem to match the daily totals today, but what’s a signature-validation watcher to do? I’ll use the daily counts.

The total signatures examined is now 29,937 (about 21.7% of the total). There have been 3,968 invalid signatures found, for an cumulative rejection rate of 13.25%. The invalid signatures include 3,506 that are not found in the voting rolls, 113 duplicates, and 349 that did not match the signature on file. There are also 89 signatures at various states of processing for a missing signature card (by now, some may be good and some rejected–I’ll treat them all as good until I learn otherwise).

The 113 duplicates suggest a duplication rate of about 1.74% in the total petition. Using the V2* estimator, the number of valid signatures is expected to be 117,049 leaving a shortfall of 3,528 signatures from the 120,577 needed to qualify for the ballot. The overall rejection rate should be about 14.99%.

Here is a snapshot of the trends: 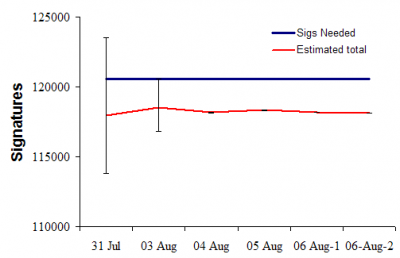 Still no unexpected deviations as the counting continues. R-71 continues on track for failure.

Dave Ammons has posted some new information about the signature validation process and the numbers that have been posted by the SoS.

Elections Division has decided that a more accurate cumulative error or rejection rate (currently 11.63 percent) should reflect the sizable number of signatures that have been going from the rejected pile to the accepted stack after a master checker reviews the checker’s decision to reject. That is 409 so far. As previously discussed, also nearly 100 signatures that have been set aside because there was no voter signature on file will be shifted over to the “accepted” stack once the counties send the person’s electronic signature.

In other words, the SoS office wasn’t giving us the number of invalid signatures. What they were giving as “invalid signatures”, were only invalid in a first-stage of checking. A second-stage check has resulted in some signatures being considered valid again. All I can say is unbefuckinglievable!

I’ve already been treating the “missing signature” counts as valid signatures. But without knowing the ACTUAL number of invalid signatures by category, it is difficult to project whether I-71 will make the ballot.

I’ve run three scenarios based on incomplete numbers posted at the SoS site.

We know there were 409 signatures that failed at the first checking phase that were subsequently accepted in phase 2. We don’t know which of the bad batches they came from (signatures not found on voter rolls, duplicate signatures, or signature mismatches) .

If I had to guess, I think the majority came from the signature mismatch pile. But there were only 349 signature mismatches, so we have 60 that were either considered duplicates or not found on the voter rolls. Subsequently, they were considered not duplicates or found on the voter rolls. Both seem equally likely (or unlikely) to me, but I don’t really know what the “Master Checker” does.

So here is what I did. First, I assumed 349 of the 409 came from the signature mismatches. The remaining 60 I dealt with in three ways:

Remember, 120,577 signatures are needed to qualify. Here is what happens using the V2* estimator:

Obviously, the biggest determinant of R-71’s fate is the number of duplicate signatures in the phase one check that are subsequently accepted in phase two. With any luck the actual number of signatures rejected in each category will be released.