This poll comes from Public Policy Polling (PPP) and shows Murray leading Rossi 49% to 47%. The poll was taken from 14th to the 16th of October on a sample of 1,873 likely Washington voters. The margin of error is 2.3%.

PPP makes an interesting observation about the race (emphasis added):

There’s a pretty strong argument that the Washington Senate race is the most stable in the country: PPP finds Patty Murray leading Dino Rossi 49-47, basically identical to our July poll of the race that found her ahead 49-46.

The reason for the stability is that voters know these candidates, they know what they think of them, and nothing they’ve heard during this campaign has changed those opinions in one direction or the other. In July Murray’s approval rating was 46/45. Now it’s 47/48. In July Rossi’s favorability was 43/48. Now it’s 44/49.

The fact is, Murray has now led in the last seven of the eight polls taken in October with margins from +1 to +13 and with an (unweighted) average of just over +5%. Take a look at the entire polling history: 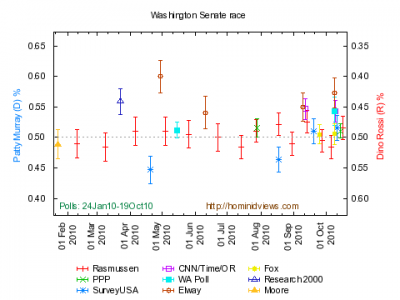 Note to pollsters and reporters…that meme about how close and back-and-forth this race is? Yeah…that last’s month meme based on a tiny blip in the data.

Note: The graph in the first version of this post included a poll by DSCC. I’ve reposted the graph without that poll.

Update: At Hominid Views I do some statistical analysis of the poll and further examine the differences between robopolls and live-interview polls in this race.