A new Elway poll (first reported on Publicola) has been released for the 2012 Washington state gubernatorial contest. The poll of 405 registered voters (5% MOE) surveyed from the 18th to the 22nd of July has former Democratic congressman Jay Inslee leading Republican state AG Rob McKenna by 43% to 36%.

The poll reflects a turn-around in the race that has, until now, mostly been led by McKenna: 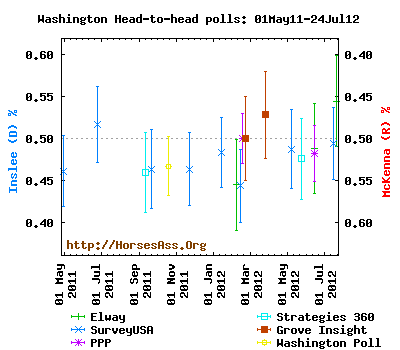 If you squint a little, you can probably discern a long-term trend away from a McKenna and toward Inslee.

The regional breakdown in the new poll has Inslee leading McKenna in Seattle (+33%), King County outside Seattle (+8%), Pierce and Kitsap (5%), and North Sound (16%). McKenna leads in Eastern Washington (+9), and they are tied “South and West of Puget Sound.”

Elway chalks up the lead change to a shift in preference among independent voters:

I subjected the Elway results to a Monte Carlo analysis of a million simulated elections. The results have a great deal of uncertainty as only 322 voters expressed a preference. The final tally gives Inslee 865,677 wins to McKenna’s 126,742 wins. That is, if the election was held now, the poll results suggests Inslee’s lead would hold with a 87.2% probability, and McKenna would win with a 12.8% probability.

Since Statisticians usually consider 95% probability as the cut-off, Inslee’s lead is “within the margin of error.” Here is the distribution of election outcomes from the simulated elections: 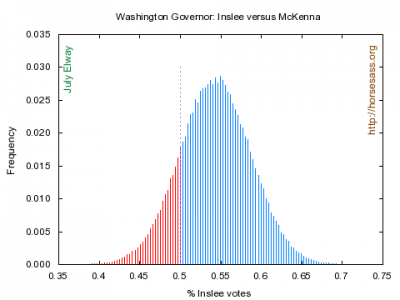 Last week’s Survey USA poll (that I analyzed here) was taken on the 16th and 17th of July, immediately before the Elway poll, and had McKenna leading Inslee 42% to 41%. The poll was a little larger than the Elway poll, with 525 of 630 registered voters expressed a preference for Inslee or McKenna.

What happens if we do a similar analysis using both polls jointly? After a million simulated elections, Inslee came out on top 699,377 times and McKenna won 291,968 times. Thus, Inslee would be expected to win a July election with a probability of 70.5% to McKenna’s 29.5%. Here is the distribution of election outcomes: 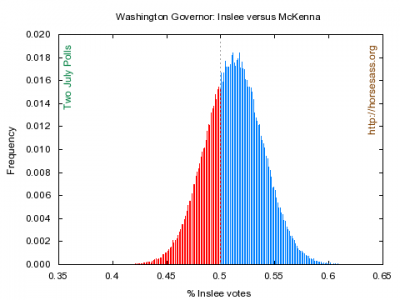 Statistically, the race is still a tie, of course.

A final point of interest is the “likeability” measure that has Inslee up 34% to 27%. Unfortunately, this wasn’t reported for the previous Elway poll. One must wonder if the reports of McKenna’s negative interactions with the media are taking a toll. Additionally Jay Inslee’s excellent “introductory” ad that began airing on July 8th has probably helped his image and name recognition among voters.

A plausible reason for McKenna’s erosion of support is the recent Supreme Court ruling on, and the ensuing media coverage of McKenna’s role in the lawsuit against “Obamacare.” Just as voters are getting “in the mood” for the 2012 election season in a year with a polarizing presidential election, the ruling has provided a dose of hard partisan information about McKenna.