The poll shows Gov. Christine Gregoire (D) leading challenger Dino Rossi (GOP-Party) 52% to 36%, with 12% “undecided”. This relatively small poll of 405 people was taken from July 27th to July 31st, and has a margin of error of 5%

This is the fifth July poll in this race. Rossi has led in none of them. In fact, Rossi has not led in a poll since the end of February—going back 14 polls.

As usual, I’ll analyze the results using a Monte Carlo approach (1,000,000 simulated elections with 405 voters, but this time the analysis is modified [upon prodding by scotto and Richard Pope] to include an additional uncertainty term. Technically, now I am drawing counts of votes from a beta-trinomial distribution and using uniform [uninformative] prior distributions on the preference probabilities). 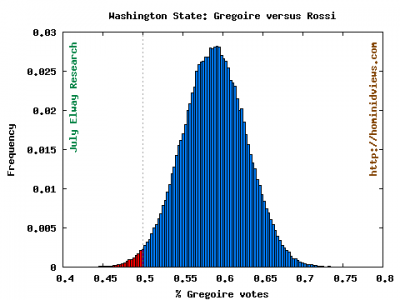 You may recall that there was a recent Strategic Vision poll of this race that gave Gregoire a slimmer 47% to 45% lead. That poll was taken from 25th July to 27th July. Given that the Elway and Strategic Vision polls were taken back-to-back, a combined analysis would seem in order.

Here is the plot showing the distribution of votes in the million elections for the combined polls: 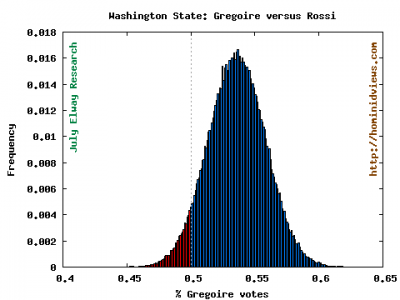 Elway Research also polled for the presidential election in Washington state. Sen. Barack Obama (D) leads Sen. John McCain (R), 47% to 35%. This +12% margin is notable because, if I’m not mistaken, this is the first time that Gregoire has polled better against Rossi than Obama has against McCain.

Other results of note in the Elway poll include the Commissioner of Public Lands race where Peter Goldmark (D) barely leads incumbent Doug Sutherland (R) 31% to 30% (well within the margin of error, obviously). In the Attorney General race, incumbent Rob McKenna (R) leads John Ladenburg (D) 41% to 30%.