Gregoire won 965,619 of the simulated elections and Rossi won 3,852 times. This suggests that Gregoire has something approaching a 96.9% chance of beating Rossi (if the election were held now). A statistician would simply point out that Gregoire’s lead in this poll is outside the margin of error. 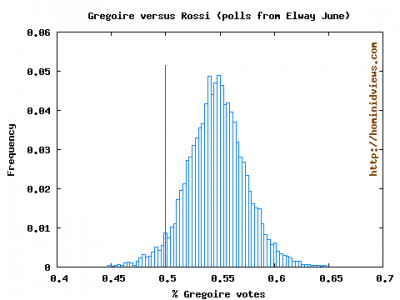 This current poll makes the eighth consecutive poll in a row in which Gregoire has led Rossi. At this point in the election season, Gregoire holds a commanding lead over Rossi.