The SurveyUSA poll sampled 658 people. Gregoire received 47.4% support, Rossi received 48.2% support, 2.9% preferred another candidate, and 1.5% were undecided. The poll was taken between the 5th and 7th of September, on the heels of the Republican National Convention that ended on September 4th. The poll’s margin of error is ± 3.9%.

Prior to this poll, Rossi had not held the lead for fifteen consecutive polls, stretching back to late February. One July poll had found the race tied. 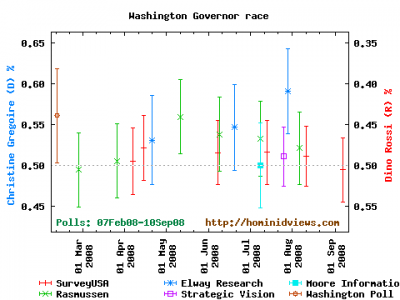 We can empirically determine the probability that either Rossi or Gregoire would win an election held now using a Monte Carlo analysis. 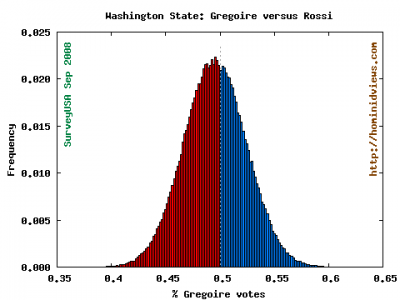 The poll results could reflect a couple of things. The obvious possibility is that Rossi has benefited from a post-convention bounce. Or maybe a post-convention bump—time will tell. The bounce/bump possibility is supported by the observation that the same poll found the race between Sen. Barack Obama and Sen. John McCain tightened-up to a narrow 49% to 45% lead for Obama. The previous poll was the August SurveyUSA poll that gave Obama a stronger 51% to 44% lead.

The second possibility is that this is a post Democratic Convention bounce for Rossi. The Rossi campaign ran advertisements that sandwiched Obama’s acceptance speech, offering Rossi’s local version of Obama’s message of change.

This leads one to wonder…Given Rossi’s implicit endorsement of Obama’s theme, will he vote for Obama in November? Don’t bother asking him, though. It’s probably not an issue he wants to talk about.