My analysis from last Friday showed President Barack Obama leading Romney with an average of 333 to 205 electoral votes, and a 99.9% probability of winning an election held now.

Over the last few days, a bunch of new state head-to-head polls have been released. In addition, I’ve learned about a couple of recent polls that I had missed. I owe a big thanks to Sam Minter, who also aggregates and analyzes state head-to-head polls in this race. Sam has spotted a couple of my errors over the past two months, and has let me know about some recent polls I was missing.

Here are the new polls added for today’s analysis:

The bad news for Obama is the Florida poll that has Romney up by +6%. Romney has taken three of the last four polls in Florida, and would have a 91% probability of taking the state in an election now.

The other new results favorable to Romney come from red states. I should point out that Texas shows a remarkable +20 for Romney using the poll’s Likely Voter results. As DailyKos’ Steve Singiser points out, the definition the pollster used for likely voters is rather dubious. The poll’s registered voter results show a +8 lead for Romney. (I always take the likely voter over registered voter results but, either way, Romney will most likely take Texas.)

There is more bad than good news for Romney. First, he barely leads Obama (by 0.8%) in North Carolina. Over the past month, Obama and Romney have split the four NC polls. Right now Obama wins about two thirds of the simulated elections, but the trend probably favors Romney. Still…shouldn’t Romney be much stronger in NC? (Oh…and let’s not discuss the odd SC result…again. Just keep on praying for a new poll in the state.)

More bad news for Romney is that Obama dominates in Michigan by +5.6%. This makes six consecutive polls in favor of Obama in MI, all taken this year.

The terrible news for Romney is Ohio, where Obama continues to lead, albeit by only +1%, but Obama leads in all three “current” polls and the long-term trend isn’t suggesting any changes soon: 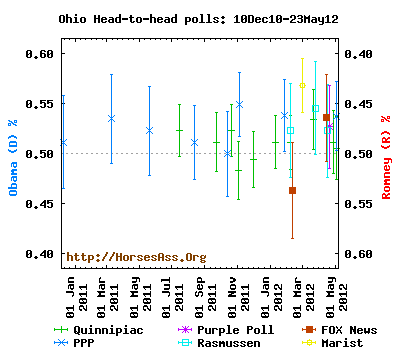 And the super horrible news for Romney is Pennsylvania. Obama leads by +6% and +8% in the two new polls. Using all three current polls, Obama wins the state 99.7% of the time. And, like Ohio, the trend offers no hints at a Romney takeover: 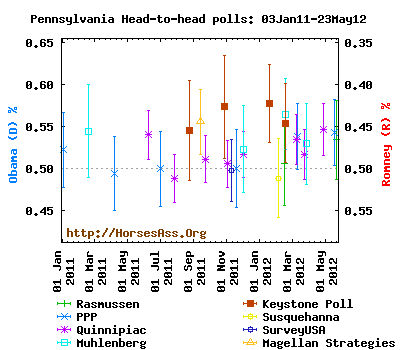 How do things stack up now? After simulating 100,000 elections using the state head-to-head polls, Obama wins 99,761 times and Romney wins 239 times (including the 101 ties). Obama receives (on average) 318 to Romney’s 220 electoral votes. If the election was held now, Obama would win with a 99.8% probability.

Romney has gained, on average, +15 electoral votes compared to last week’s analysis, but that only translates into a one tenth of one percent increase in his chances of winning. 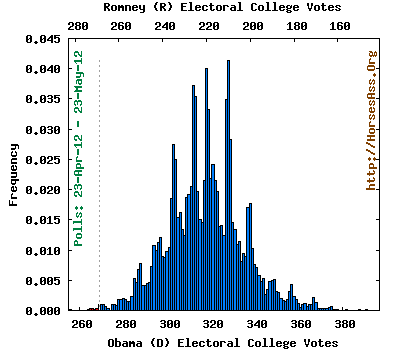