To translate McKenna’s lead into a probability statement, I ran a million simulated elections using the observed percentages and poll size from the Elway poll. Inslee won 369,617 to McKenna’s 615,161 wins, suggestingg that, for an election now, McKenna would beat Inslee with a 62.5% to 37.5% probability.

The other new poll is from Public Policy Polling, and surveyed 1,073 people (MOE 3%). The poll was conducted from the 14th to the 17th of June—it completely overlaps the Elway poll. In this poll, McKenna leads Inslee 43% to 40%.

Doing the same analysis for this second poll shows Inslee winning 219,670 “elections” and McKenna winning 773,413. In other words, this poll provides evidence that McKenna would win with a 77.9% probability in an eleciton held now.

But given the temporal overlap of the polls, we can do better by combining the two June polls. Together they cover 1,481 adult registered voters of whom 1,225 had decided on McKenna or Inslee. Inslee took 40.0% of the votes to McKenna’s 42.7%.

The Monte Carlo analysis gives Inslee 207,467 wins to McKenna’s 786,651 wins. In other words, the June polls suggest McKenna has a 79.1% probability of beating Inslee, and Inslee would win an election now with a 20.9% probability. Statisticians often consider a lead with anything less than a 95% winning chance to be a statistical tie.

Here is the distribution of election outcomes for the combined results: 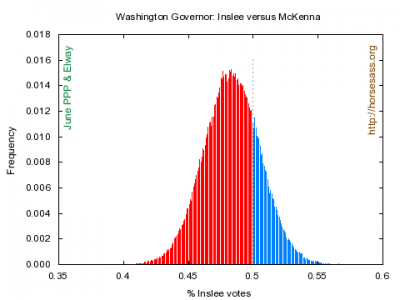 And here is a snapshot of all the polls for this race: 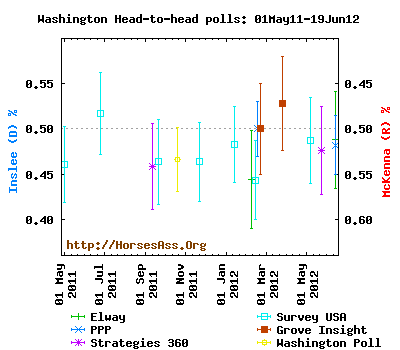 The new polls suggests to some folks (like Joni Balter and the election wonks at Daily Kos Elections) that the gap is closing in this race.

Could be. Or maybe it has just been close all along. A straight line through 48% Inslee to 52% McKenna fits within the margin of error for all of the polls. On the other hands, the polls from last year, taken as a whole, seem more favorable to McKenna than the collective polls taken this year.

I guess we need more polls to sort it out.