My previous analysis was completed early Friday morning, before most polls were released. The analysis showed President Barack Obama leading Governor Mitt Romney by 302 to 236 electoral votes (on average). In an election held yesterday, Obama would be expected to win with a 94.4% probability, and Romney with a 5.6% probability.

There have been 35 new polls released since then that cover 23 “states”. I put states in quotes, because we get polls for ME-1 and ME-2 this batch. Lots of swing states are included in this batch, and they largely come down on the side of Obama:

Both new Colorado polls offer Obama slim margins over Romney. With five current polls splitting 4 to 1 for Obama, the analysis gives Obama an 81% probability of taking the state.

We get one Florida poll for each candidate, but Romney gets the net benefit. The current polls split 3 to 2 in favor of Romney, giving the G.O.P. nominee about 2/3 probability of taking the state.

Maine-2 was considered a swing “state”, but both new polls go to Obama. Together the suggest Obama has a 87% chance of taking ME-2’s single electoral vote.

The new Minnesota poll is pretty solid for Obama, who ends up with a high probability of winning the state.

The new Nevada poll puts Obama over Romney by a modest +6%. As it happens, that’s the only poll that falls in the current poll window. It suggests Obama would win the state now with a 86% probability.

Obama leads in two new New Hampshire polls. One gives Obama a slim +1% and the other gives him a +5.1%. All four current polls go to Obama and he looks to have an 88% probability of taking the state now.

Four of five new Ohio polls go to Obama, the fifth is a tie. We now have eleven polls taken in the past week, and Obama leads in nine; Romney leads in one. If the election was held now, Obama would take the state with a 97% probabililty.

In Virginia, Obama squeaks out a +0.9% lead. It is the only current poll, so Obama comes away with a 58% probability of winning, based on this evidence.

Obama gets a modest +6.7% in the new Wisconsin poll. Now he leads in four of five current polls, with the fifth poll being a tie. In the analysis, Obama won just under 100% of the simulated elections. 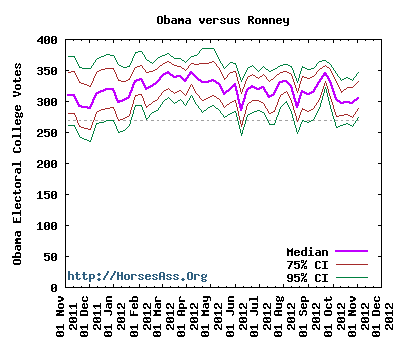 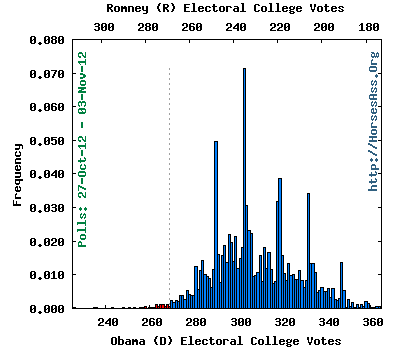