The previous analysis consisted of almost entirely pre-RNC polls, and the Monte Carlo analysis, based only on polls, suggested that Donald Trump would have no chance of winning an election held then. We now have a half dozen new post-RNC polls, including polls in NC, OH, and NV. As you might expect, the post-RNC polls show Trump, now the G.O.P. nominee, doing better against the likely Democratic nominee, Hillary Clinton.

A change in this analysis is that I’ve tightened the “current poll” window from polls taken in the past three months to polls taken within the past month. This has two possible effects for each state. First, it makes the polling data more current, which is particularly important for an accurate portrayal of Trump’s performance. His image among Republicans has dramatically changed over the past 6 months, and we can expect he will start polling better now that he is the nominee. Additionally, the smaller “current poll” window will increase the uncertainty for many states just because there are fewer polled individuals included. Thus, we see some states turn from solid in the previous analysis to strong in this analysis.

Update: Yes…Vermont is the wrong color on account of a data entry error for one VT poll. This has been corrected for the next analysis.

Did Trump get a convention bump? It appears so. 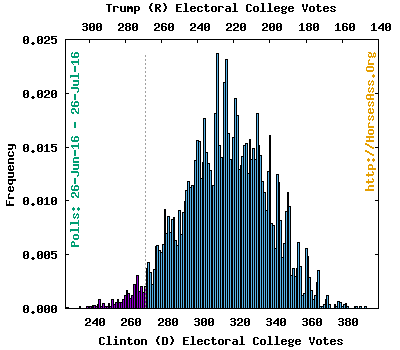 Some states stick out when compared to the previous analysis:

Trump dropped from 99% probability of winning AZ to 51% probability. What happened? First, we dropped from five current polls to three. But Clinton turns in a surprisingly strong performance in one of the polls. I suspect further polling will put Trump back into a strong lead. 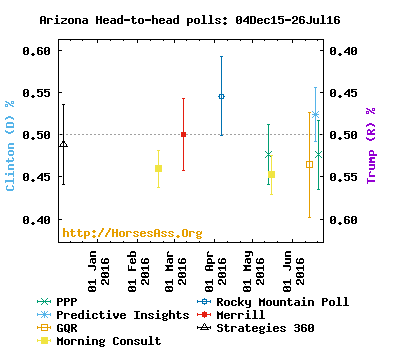 Here we have gone from 16 polls (over 3 months) to four polls taken in the past month. Clinton drops from 99.8% probability to a 56% probability of winning—essentially tied. This reflects that Clinton and Trump split the past four polls. The polling history over the past half year greatly favors Clinton, but it is not clear this will hold now that Trump is “real.” 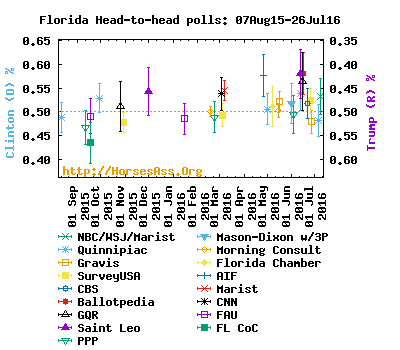 With a modest reduction in number of polls, Iowa flips from Clinton (probability 71%) to Trump (probability 94%). In the five current polls, Trump leads in three (and by +17 in the most recent poll), Clinton leads in one, and the candidates are tied in one. Iowa has always been very close, but Clinton’s small advantage seems to have vanished. 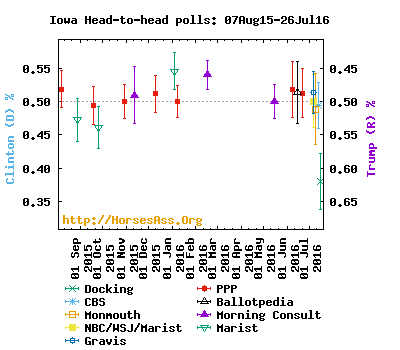 Nevada is the other state that has flipped since the previous analysis, from Clinton with a 88% probability to Trump with 67% probability of winning. Polling is scarce enough that it is difficult to make too much of this either way. 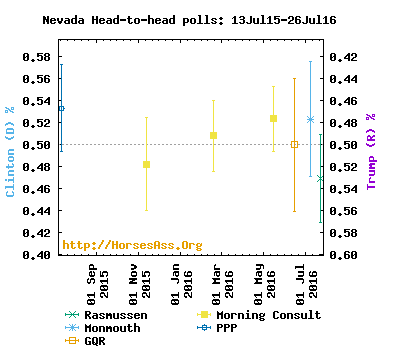 Recent polls have decreased from ten down to two, and Clinton has gained in her chances of winning from 76% to 91%. The polling history suggests Clinton’s lead is real. 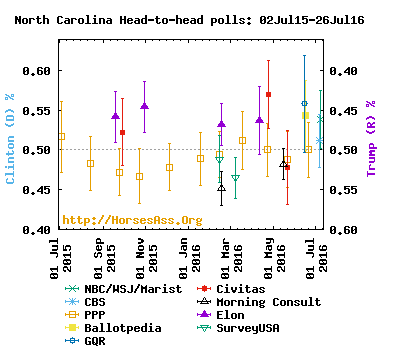 Clinton has dropped in chances for this “classic” swing state from 83% to 64%. Clinton leads in three of the six current polls; Trump leads in two. The polling history has strongly favored Clinton, but the state might be tightening up. 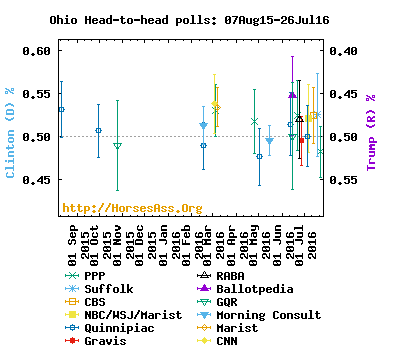 Another “classic” swing state that always goes to the Democrat. Clinton drops slightly, but much of this is the reduction in “current polls” from 10 to 3. Nevertheless, Trump does have a small (+2) lead in one of the three current polls. The larger trend suggests Pennsylvania is safe for Clinton. 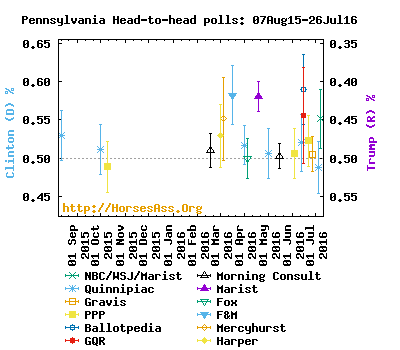 The long term trends in this race can be seen from a series of elections simulated every seven days using polls from 26 Jul 2015 to 26 Jul 2016, and including polls from the preceding month (FAQ). Since the previous analysis, I’ve found about 65 older polls. These polls have little or no effect on the current analysis, but do sharpen the standings in the past. 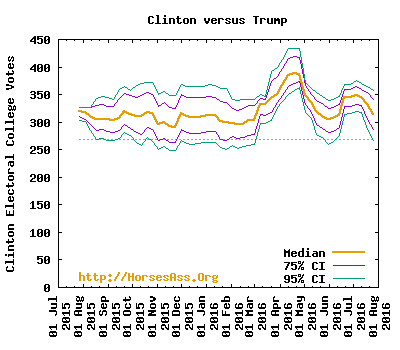