In the past several days, three new polls have been released that weigh in on the Washington state gubernatorial race. In all three polls, former Congressman Jay Inslee (D) leads state AG Rob McKenna (R) by narrow margins—always within the margin of error. This post will look at the three polls separately, and then combine them into a joint analysis.

Late last week, the second wave of the Washington Poll was released. The poll surveyed 632 likely voters (MOE 3.9%) using live interviews taken from the 18th to the 31st of October. It found Inslee leading McKenna by 48.7% to 45.6%.

A Monte Carlo analysis consisting of a million simulated elections found that Inslee won 708,884 times to McKenna’s 281,485 wins. In other words, this poll suggests that Inslee would win the election now with a 71.5% probability, and McKenna would win with a 28.4% probability.

Here is the distribution of election outcomes from the analysis: 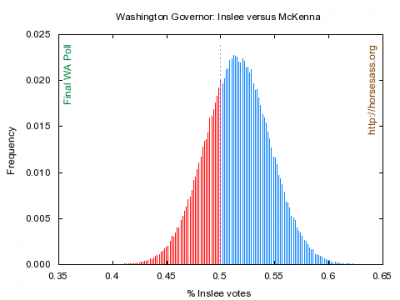 A Monte Carlo analysis of just this poll finds Inslee winning 561,944 times and McKenna winning 425,662 times. The results would suggest that Inslee would win the election now with a 56.9% probability to McKenna’s 43.1% probability: 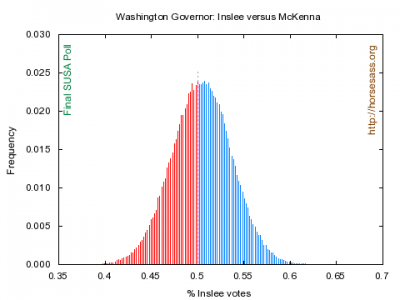 In the Monte Carlo analysis of the PPP poll results, Inslee wins 663,870 times and McKenna wins 327,401 times. This poll, alone, puts Inslee’s chances of winning an election now at 67% to McKenna’s 33% probability: 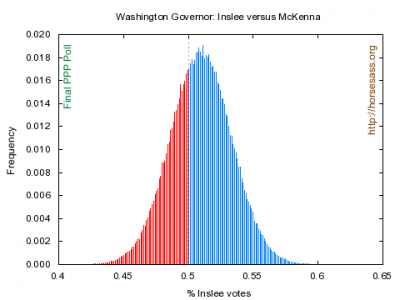 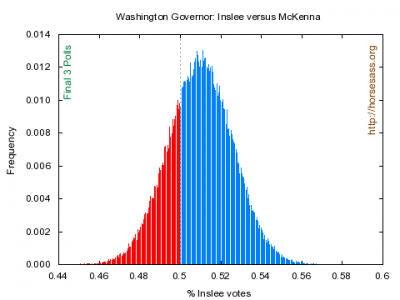 Finally, lets look at the polling trajectory over the past 6 months: 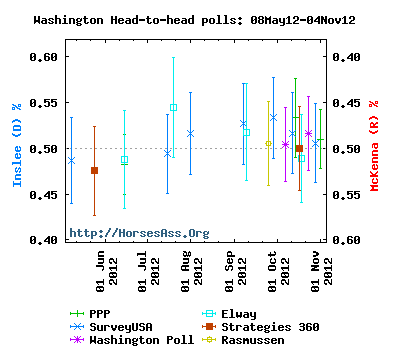 Inslee took over the lead in late summer, and appears to have held a modest lead through September. Since then, the race has tightened considerably, and we see Inslee with the slightest advantage over the last two months.

This one will be close, but the three most recent polls combine to give Inslee a slight edge.