It’s been ten days since Mitt Romney announced his running mate. Polling has been a little on the slow side since then, but we now have 15 new polls in nine states to throw into the mix. Most of the polls have been taken since the August 11 announcement.

The previous analysis showed President Barack Obama leading Romney by a mean of 334 electoral votes to Romney’s mean of 204 electoral votes. An election held then was nearly 100% certain to go to Obama.

Colorado gives Obama a +3% lead, and a winning streak of three August polls.

Romney takes all three Florida polls, matching Obama’s streak of three from the previous round. Overall, the past month of polls favor Obama with a 68% probability of winning the state. Of course, the pre-Ryan polls likely overestimate Obama’s chances.

Michigan puts Romney over Obama by a delicate +3.8% in one poll and Obama over Romney by 5% in another. The six current polls suggest Obama would win with a 90% probability right now.

The Missouri poll is pre-Ryan, and shows Romney with a slender +1% lead. In fact, a newer SurveyUSA poll that I mentioned in the previous analysis had Romney leading by slightly more (+1.9%).

No sign of a Ryan bump in New York, where Obama leads by +29%

We only have one new Ohio poll and that goes to Romney by +2%. The six current Ohio polls, taken together, give Obama a 98% probability of winning an election held now.

Oklahoma gives Obama a little bump. Romney’s +29% in the current poll was a +35% in May, when the last Sooner Poll was taken.

In Virginia, Obama leads Romney by +5% in one poll and Romney leads Obama by +3% in another. Obama leads in four of the five current polls and would be expected to win now with a 91% probability.

Will Ryan convince Wisconsin voters to support Romny? Three polls address this: Romney is up by a slim +1% in two polls and Obama is up by 4% in the third. Overall, Obama still wins the state by 97%.

Empirically, the selection of a running mate tens to strengthen a candidate’s chances. Usually the bump are transient—that is, VP selection results in a temporary “bounce.” Here what we see is a small bump up some ten days after the announcement.

Since the analysis also includes numerous polls taken prior to the Ryan selection, we should expect Romney’s prospects to improve as the pre-Ryan polls “age out” of the analysis. Whether the bump persists or becomes a bounce is still unclear. 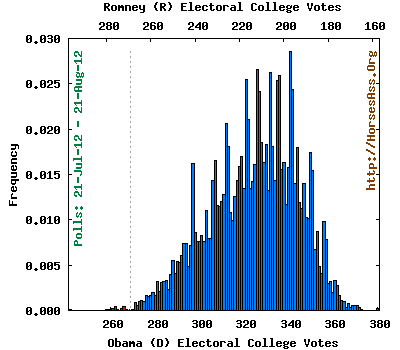