A rather paltry 15 new polls covering 10 states have been released since my previous analysis. What makes this new batch of polls interesting is that most of them are post-first-debate polls. And looking at them, it’s clear that Romney will get either a boost or a bump from the polls. (My prediction was that Romney would get an acute advantage, but a long term disadvantage from the debates—it’s simply to early to test that prediction.)

Here are the polls, including some in seven or eight swing states:

Before the debate, Obama had lend in 5 consecutive Colorado polls, but by margins of from 3% to 6%. Now Romney takes two of the three new polls and three of nine current polls (currently defined as polls taken in the past three weeks). Obama’s goes from winning 97% to 91% of the simulated elections.

In Florida, Romney leads Obama in two new post-debate polls, albeit by small margins. With fourteen current polls, and the fact that two polls aged out—one that barely went to Romney and one that was weak for Obama—there is almost no difference in the projected outcome of an election held now for Florida.

In Missouri, Romney leads Obama by +3%, his smallest lead of the current polls. That causes his chances to drop from 100% to 99.9% in the state.

Obama barely leads in the new Nevada poll. The +1% is his weakest showing of the current polls, except for one late September tie. His chances drop from 99.5% to 99.2% as a consequence.

No sign that New Mexico is flipping over to Romney. Obama’s +9% lead is right up there with three other polls that were from +9% to +11%.

Two new polls in Ohio split between the candidates, and by +1% each. The WeAskAmerica poll is the only current poll, of ten, in which Romney leads. Obama still wins 100% of the simulated elections.

Romney take two of two Virginia polls. Prior to these polls, Romney lost 13 polls in a row, dating back to early September. But with Obama leading in the eight other current polls, his chances have dropped from 100% down to 99%.

Wisconsin is still in Obama’s column after the debate gives Obama a rather weak lead over Romney by +2%. This is Obama’s weakest showing among the current polls, but he still takes 100% of the simulated elections.

Now, after 100,000 simulated elections informed only by state head-to-head polls, Obama wins 100,000 times and Romney wins 0 times. Obama receives (on average) 342 to Romney’s 196 electoral votes over the simulated elections. These are the identical numbers we had before. The results suggest that for an election held now, Obama would have a 100.0% probability of winning.

Of course, the very abrupt change in momentum that we may end up seeing in the aftermath of the first debate is not fully represented in this analysis. My three week polling window smooths the results over three weeks. (The window will shrink to two weeks very soon.)

We can assess the race with less smoothing by shrinking that window. In the following table, I’ve shrunk the window a number of times. The results clearly show that Romney has gained the initiative in the short run, even if he still is the probable loser in an election held now:

Current poll windows below five days tend to start reversing the trend. Fewer polls become included as “current polls”, which means more older polls then get averaged in (at least with the modest pace of polling right now).

Romney’s peak chances occur by assuming only the post-debate polls, when available, should be used—that is, any prior strengths or weaknesses observed through polling in the recently polled states is entirely discarded. Romney peaks out at a 22.5% chance of winning an election held now under that scenario.

The long term trends in this race can be seen from a series of elections simulated every seven days using polls from 07 Oct 2011 to 07 Oct 2012, and including polls from the preceding 21 days (FAQ). Even with a small handful of post-debate polls, we see Obama’s momentum stopped, and the uncertainty in outcome increased (that is, there is more spread between upper and lower 95% limits) . 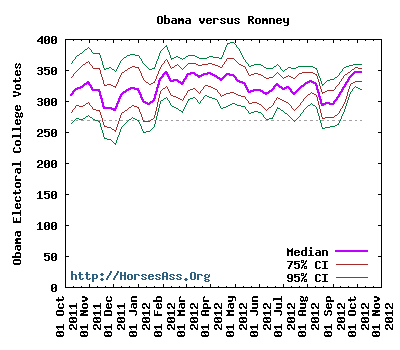 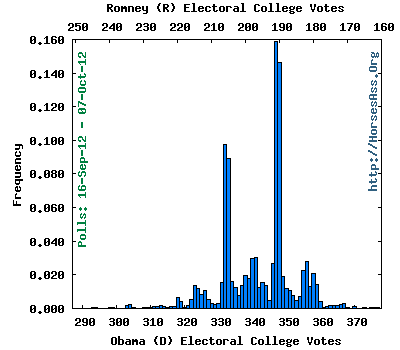