Now that both conventions have come and gone and the post-convention polls are coming out, it’s a good time to assess the “score” in the 2012 Presidential Election.

My previous Monte Carlo analysis of the race was posted ten days ago (between the two conventions) and showed President Barack Obama leading Governor Mitt Romney by a mean of 305 to 233 electoral votes. An election held then would be expected to end in Obama’s favor with a 97.2% probability. Romney had a 2.8% probability of winning.

Thirty two new state head-to-head polls covering 18 states have been released since then:

I’ll only discuss a few states.

In Colorado, Obama takes both new polls, but by modest margins. Colorado seems to have settled for Obama by a small margin: 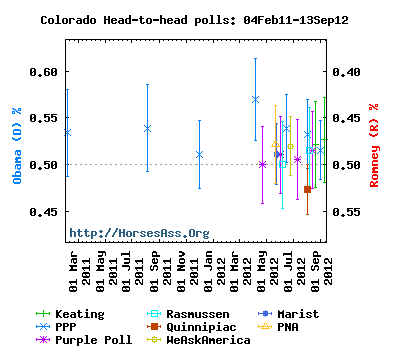 Five new polls from Florida ought to be enough to tell us who’s ahead. But, no: Obama takes three and Romney takes two. This gives us a total of 12 “current polls” (i.e. those taken in the past month), and in aggregate, Romney comes up with an advantage. In an election now, Romney would take Florida with about an 80% probability.

Obama takes both new Michigan polls by fairly nice margins. There are a total of seven “current polls” for the state—all but two go to Obama—and Obama won 94% of the simulated elections in the state.

Obama seems to have Minnesota pretty well locked up, with the new polls.

The new Missouri poll give Romney a small +3% lead over Obama. We have four other “current” Missouri polls from August. Romney takes all but one. Unless there is some kind of post convention second thoughts coming from the state’s voters, Romney looks likely to win the state.

Romney takes the latest Montana poll by just +5%. The previous poll, from mid-August had Romney up by +17%.

Obama turns in a weak +5% performance In New Hampshire, suggesting he only has an 81% chance of taking the state now.

Two new North Carolina polls offer dissimilar pictures. The PPP poll offers Obama a +1% edge over Romney, but the Survey USA poll done for the Civitas Institute (a very right-wing state “think tank”) has Romney up by +10%. The Survey USA poll was taken during the convention and the PPP poll was taken after, so one could argue that there is a post-convention bounce for Obama. But the evidence to support that is vanishingly thin. The polling for the past month gives one poll to Obama, two ties, and four to Romney. Overall, the evidence still supports a good Romney advantage in the state. Here is all the polling in a nicepicture: 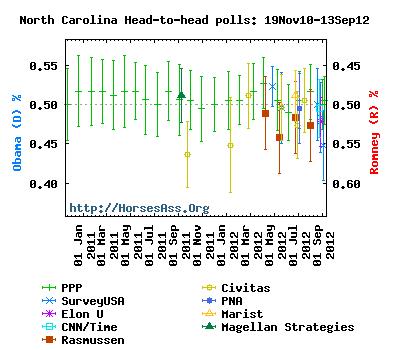 Four new Ohio polls split three to one for Obama. The three Obama polls are all post-convention. Romney’s poll is pre-convention. The nine polls taken over the past month go five for Obama, two for Romney and two ties. The evidence gives Obama a slightly stronger advantage in Ohio than Romney has in North Carolina.

The Virginia split, giving Obama a +5% in one and Romney a +5.4% in an even larger poll. The other three current polls go one for Obama, one for Romney and one tie. The state is still really, really, close, although Romney wins about 68% of the simulated elections.

In other words, little has changed in the past ten days. Obama still maintains a solid lead in the electoral college vote. It is interesting to note that the popular vote (as assessed by national polls) seems to be swinging in Obama’s direction now as well.

The long term trends in this race can be seen from a series of elections simulated every seven days using polls from 13 Sep 2011 to 13 Sep 2012, and including a one month polling window (FAQ). 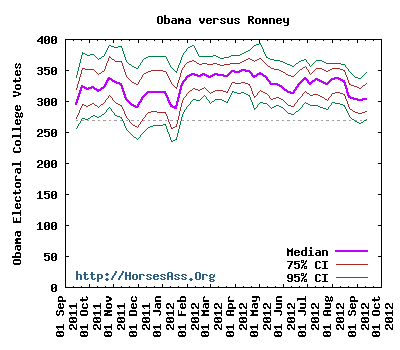 Compared to 2008, this is not a very dynamic race. 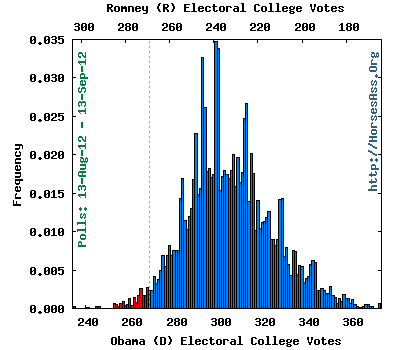