Control of the Senate is up for grabs this fall. My previous analysis showed Democrats with a average of 49 seats and Republicans with 51 seats, putting the Democrats in range to flip the Senate. That was over a half year ago, so it is time to update the analysis using a plethora of new polls released since then. 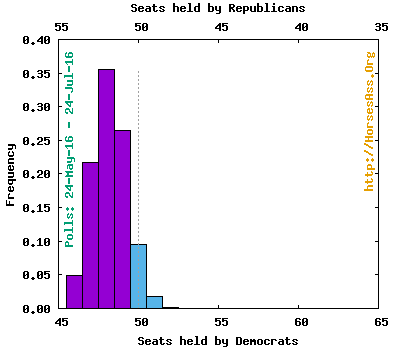 The most likely outcome is a 52 to 48 split with Republicans in charge. Here are some state-by-state comments.

Florida: Without question, the return of Marco Rubio to the Senate race has changed the likely outcome. Democrat Patrick Murphy has a fight on his hands. Polls occasionally favor Murphy, but the most likely outcome is a victory for Rubio (assuming they both come out on top in the August 30 primary). 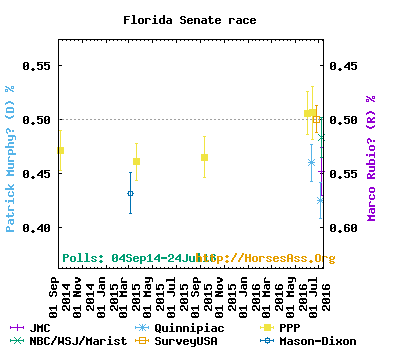 Illinois:
Republican Mark Kirk leads Democrat Tammy Duckworth in the only recent poll. Up ’till now, Kirk has been considered one of the most endangered Republican incumbents. Duckworth crushed Kirk a year ago, and then there was a long poll-less period. Clearly more Illinois polls are needed. 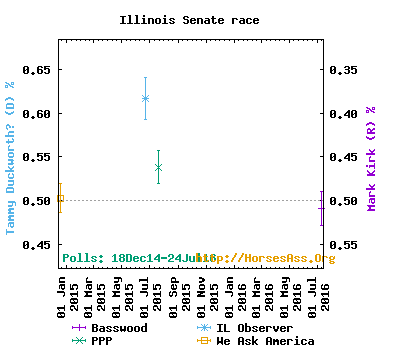 Nevada: Harry Reid’s (D) seat is up for grabs with Catherine Cortez Masto (D) besting Joe Heck (R) based on two recent polls. Cortez Mastro only has a 67% probability of taking the seat based on these polls. Most older polls show Heck with the advantage. This one is a toss-up. 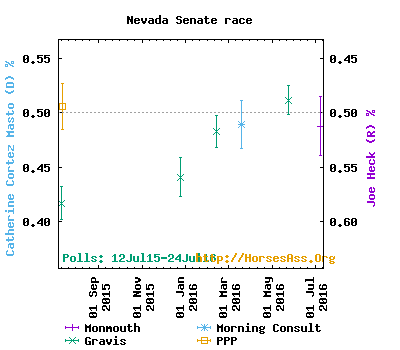 New Hampshire: Sen. Kelly Ayotte (R) is facing a mighty challenge from Governor Maggie Hassan (D). The six current polls give the Democrat a slim 54% probability of taking the seat. This is, essentially, a tie, and the polling history shows this to be an extremely close race with a small advantage to Ayotte. 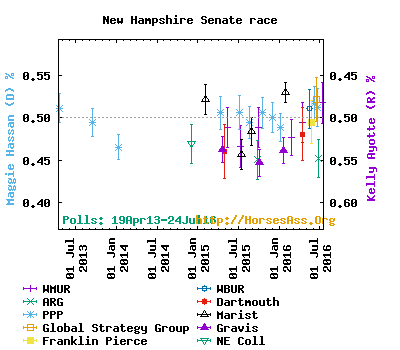 Ohio: Sen. Rob Portman (R) has pulled ahead of former Gov. Ted Strickland (D), after Strickland led for most of the past year. Portman would win an election now with a 91.9% probablity. 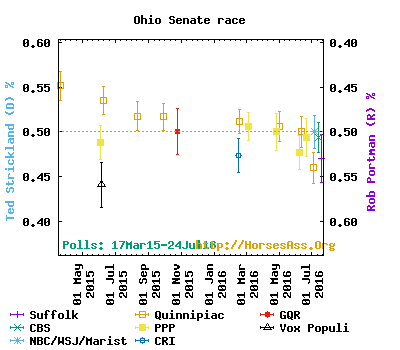 Wisconsin: Sen. Ron Johnson (R) is the most endangered sitting Senator in the country. He is likely to lose to former Sen. Russ Feingold (D), if the polling to date is any indication. 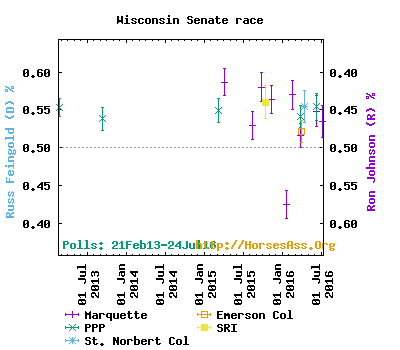 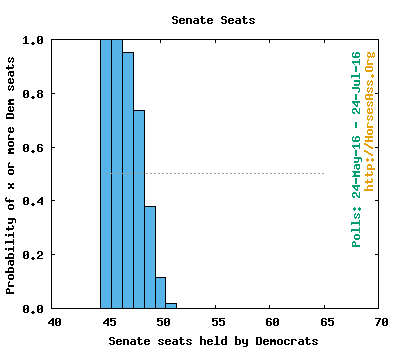 @ Current party in office
& An older poll was used (i.e. no recent polls exist).
*Analyses assume that the two independent candidates will caucus with the Democrats.