I’ve finally succumbed to the pressure of “doing something about South Carolina.” The last straw was Goldy harassing me over the phone for the umpteenth time this past week. So, I caved and changed the inclusion criteria for states lacking “current polls.” Note that I did not simply drop the vexing S.C. poll, but the new inclusion criteria means that when there are no current polls, multiple old polls will be pooled.

Here is what I have been doing: If a state does not have a “current poll”, I use the single most recent poll available. Right now, the definition of “current poll” is any poll taken over the past month (this “window” will shrink as the election approaches and the pace of polling increases).

That simple rule worked pretty well in 2008. But a single, large poll in South Carolina has plagued these analyses since late last year. The poll is perfectly valid, and might even be correct in giving Obama an 85% probability of winning the state. But it is quite old, and there are other slightly older polls in the state that contradict it. What’s an analyst to do?

I modified a suggestion from Richard Pope and used an inclusion window for older polls, the length of which depends on how old the most recent poll is. Here his the new rule set:

There are several disadvantages of this new rule set: First, it is complicated. As you know, I strive to minimize arbitrary assumptions in the methods, but now I’ve gone and added a complex, arbitrary rule. Yuck. Another disadvantage is that the new rules will tend to overestimate the winning certainty for states with multiple old polls included in an analysis. On the other hand, a state that hasn’t been polled in a long time probably hasn’t been polled much, so most of the time the single most recent poll will still be used. South Carolina is an exception. There were a bunch of polls taken late last year. I believe this happened because there was “piggyback” polling of the general election by pollsters covering the contentious G.O.P. primary in that state.

Okay…so let’s get to it. Just three days ago the analysis had President Barack Obama leading Gov. Mitt Romney by 336 to 202 electoral votes. The results suggested that, if an election was held now, Obama would almost certainly win.

In the three days since my previous analysis, there have been some 19 new polls (plus, I am including an old poll, previously overlooked). Here are the polls:

The race seems to tighten in Arizona where Romney just squeaks by with a +3%. Also, this is the first time since early June that Romney has been under 50%.

On the other hand, California tightens as well. Obama gets +14% where he used to pull in the low +20%.

Another pair of Colorado polls go to Obama, who leads in seven of the eight current polls, and seems to have a 91% chance of taking the state (in an election held now).

Florida gives each candidate a poll, by +1%. From twelve polls pooled over the past month, the ~11,000 responses go to Obama 50.8% of the time and to Romney 49.2% of the time. That translates into an 88% probability that Obama would win the state now.

The good news for Romney is that Georgia shows the strongest result for him this year.

Iowa has a strong +8% result for Obama. This poll was taken slightly before the Rasmussen poll I included last analysis that had Romney up by +3%. Even so, with Obama taking two of the three current polls, Obama would seem to have an 89% chance of taking the state right now.

We finally have some polling in Nebraska, where Romney bests Obama by +11%. That the good news for Romney. Recall that Nebraska assigns one elector to the winner of each CD, and the overall state winner gets the other two electors. The bad news for Romney is that Nebraska’s second congressional district polls at a 44% tie. Obama won NE-2 in 2008 and may do it again! (The polling report mentions that Romney has a solid lead in the other two CD’s, but the numbers are not given; instead, an older poll is used for those two CDs. Romney leads in both.)

Two new North Carolina polls go to Obama by small margins. Even so, Romney has led in five of nine current polls (and there was a tie). Overall, the pooled polls favor Romney with an 83% probability of winning an election held now.

With the three new Ohio polls, Obama has a streak of eight consecutive poll leads in the state. Obama won 99% of the simulated elections in the state.

A double-digit lead for Obama in the newest Pennsylvania poll. Obama has won all four of the state’s current polls.

Like Ohio, the new Virginia poll gives Obama a streak of eight consecutive poll leads in the state. But Obama only won 95% of the simulated elections in Virginia.

The new Wisconsin poll means Obama leads in all five current polls, and gives Obama a very high probability of taking the state (in a hypothetical election held now).

Using the new “old poll inclusion criteria,” here is the picture of the race over time: 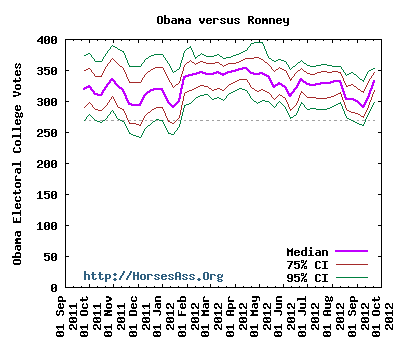 Hmmm…it looks pretty much like the old one that used the simple “single most recent” rule. 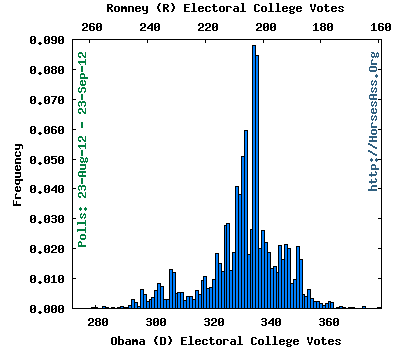