Last week’s analysis showed President Barack Obama leading Romney with an average of 323 to 215 electoral votes in a hypothetical election held then. The results suggested Obama had a 99.3% to Romney’s 0.7% probability of winning.

Since then, eleven new polls have been released (although only a couple of the polls were administered after last Thursday’s Supreme Court ruling on the Patient Protection and Affordable Care Act):

Alabama is solid for Romney (+21.9%), as Massachusetts is for Obama (+16%). Arizona is turning into a solid Romney state. He has led in the past five polls, going back to mid-April.

Obama solidifies the three “classic swing states.” In Florida, Obama leads in both polls by +0.8% and +4%. Combined with the one other recent poll, Obama would be expected to take the state now with a 93% probability.

In Ohio, Obama has a +9% in the new poll, giving him the lead in both current OH polls; he would be expected to win the state now with a 99% probability. Romney seemed to made some headway in late May and early June, but that “surge” now seems transient: 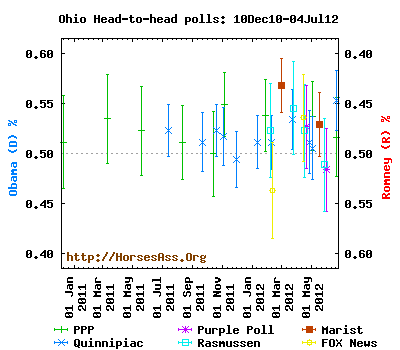 The Ohio story is repeated for Pennsylvania where Obama has a modest +6% lead over Romney, leads in both current polls, and would win with a 99% probability. The difference is a lack of evidence for a transient Romeny surge for the state: 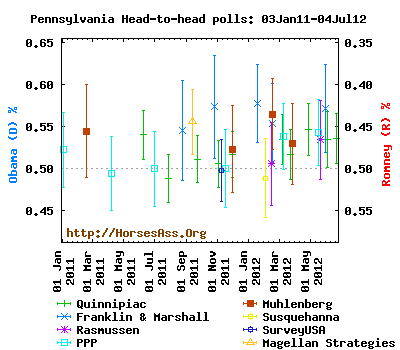 North Carolina is interesting. Romney goes up +5% in one poll and Obama goes up by +2% in the other new poll. Romney now leads in three of the four current polls, and would be expected to take the state with a 71% probability: 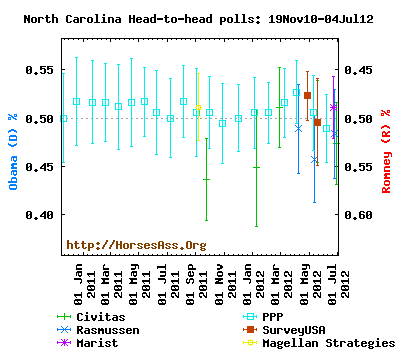 Michigan has Obama up by a moderate +5% over Romney. The state has gone from a tie one year ago, to a solid Obama lead since January, back down to a small advantage for Obama in the past few weeks: 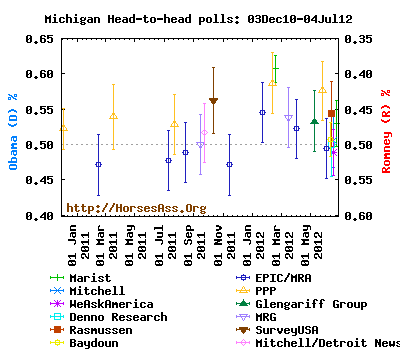 Finally, the new New Hampshire poll gives Obama a not-so-impressive +1% lead over Romney. Still, the larger trend and the recent flurry of polls has the state painted blue: 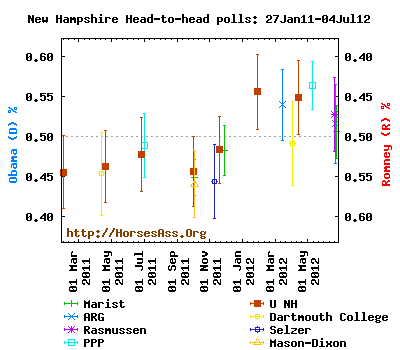 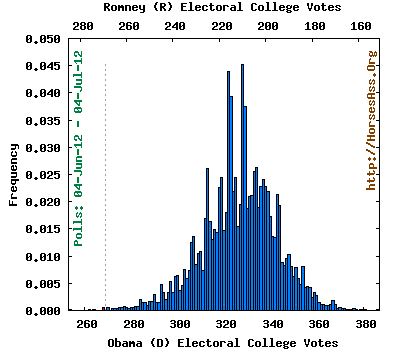