The previous analysis showed President Barack Obama leading Mitt Romney by an average of 348 to 190 electoral votes and a probability of beating Romney of 99.989%—that is, Romney won 11 of the 100,000 simulated elections.

Now nine new polls weigh in on the race:

The New Mexico poll is, perhaps, a little surprising in giving Obama a +19% lead. But, really, Obama’s lead has been rock-solid in the four NM polls taken to date: 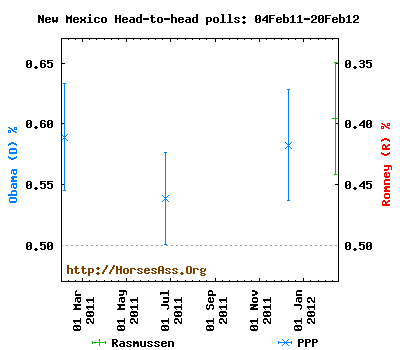 Romney leads Obama by +2 in Iowa. My hunch is that this is an outlier, given the polling to date and that this result comes from a non-mainstream pollster: 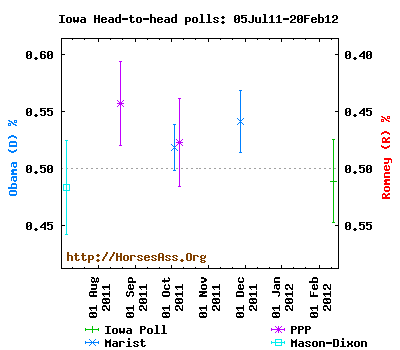 The Ohio poll, giving Romney a +6% edge over Obama, reverses the trend mentioned in the previous analysis (see the graph there). Overall, Obama still leads in Ohio because there are four current polls that, combined, give Obama a 51% to 49% edge. Indeed, Obama won Ohio in 85% of the simulated elections.

With the new polls, a Monte Carlo analysis (100,000 simulated state elections, each contributing to an electoral college election) has Obama winning 99,868 times. Now Romney wins 132 times, suggesting that Obama would win an election held now with a 99.9% probability. Obama receives (on average) 331 to Romney’s 207 electoral votes, a gain of +17 votes for Romney. 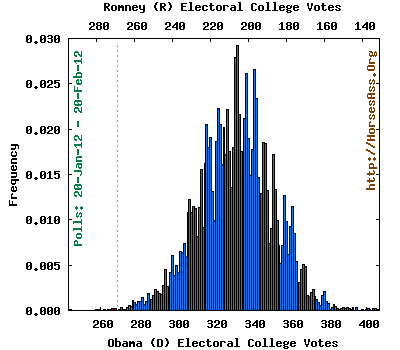