My analysis two days ago showed President Barack Obama leading Governor Mitt Romney by 299 to 239 electoral votes, and Obama with a probability of winning a hypothetical election now by 93%. I pointed out that the race had stabilized and, perhaps, slightly swung in favor of Obama.

Today’s polls are consistent with the idea that the race has stabilized. We see Romney bouncing up a handful of electoral votes, but Obama’s gaining a bit more in his probability of winning an election now.

Here are the 36 new polls covering 16 states released over the past couple of days:

You may recall from early October, a Rocky Mountain poll in Arizona that had Obama leading by +2%. We finally get a new poll from the state. And it has Romney leading Obama by +8%. The new poll seems consistent with most earlier polls, suggesting the Rocky Mountain poll was an outlier. Even so, the Rocky Mountain poll was notable because they provided both English and Spanish language live interviews, thereby likely capturing a more representative sample of Latino voters. Why is that important? University of Washington Political Science Professor Matt Barreto explains.

Five Colorado polls were released, none of which showed Romney leading. There was one tie, and Obama had smallish margins in the rest. Of the seven current polls Romney leads in one. Even so, the very small leads for Obama only put him at a 79% probability of winning right now.

Four new Florida polls go 3:1 in favor of Romney. In the past 10 days, there have been 11 polls taken, and Obama only leads in three (plus there is one tie). Romney takes away an 86% probability of winning at this point in the race.

In Iowa, two new polls show Obama leading by small (+4%, +2%) margins. Romney only leads by +1% in one of the six current polls. Obama is at a 92% probability for taking the state now.

A new Minnesota poll has Obama leading Romney by +8%. With only two current polls Obama is at a 95% probability of winning now.

The three new Nevada polls favor Obama by small margins, and by 50% in each case. Obama leads in all seven current polls, and is at a 96% probability.

Just a week ago, New Hampshire was looking to be in Romney’s column. Today’s poll gives Obama a +3% and three of the six current polls, and Obama’s margins are greater than Romneys. Together, the evidence suggests Obama would take the state now with a probability of 77%.

New Mexico remains rock solid for Obama with this new +9%.

Four new North Carolina polls tell a mixed story. Romney has a +8% in one and a +1% in another, Obama leads one by +3% and one is tied. In aggregate, however, it is pretty clear that Romney is ahead overall. He leads in three of the six current polls, with stronger leads. Taken together, Romney is at a 94% probability of taking the state now.

Three more Ohio polls go to Obama, but by small margins. We now have 14 current polls, and Obama leads Romney eleven to one with two ties. The net result is that Obama is at a 97% probability of taking this most important of swing states.

Another Pennsylvania poll goes to Obama by a single-digit +5%. But Obama is at 51% in this poll. The four current polls all go to Obama by similar small margins.

Virginia keeps us guessing with Obama and Romney splitting a new poll at 47% each. Here is how close the state is. Each candidate leads in three polls of the seven current polls, and there is a tie. There are 4,970 total “votes” therein, of which Romney gets just 10 more than Obama. That’s close!

Two of the three new polls in Wisconsin goes to Obama, and the third is a tie. Romney does not lead any of the six current polls, so Obama earns a 92% probability of winning the state.

Here is the long term trend in this race, found from a series of elections simulated every seven days using polls from 26 Oct 2011 to 26 Oct 2012, and including polls from the preceding ten days (FAQ): 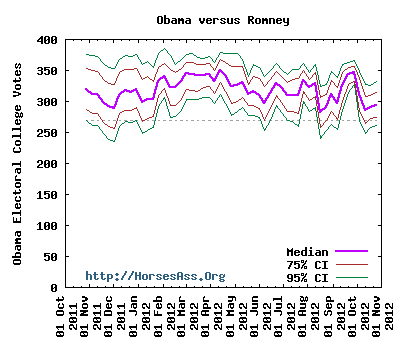 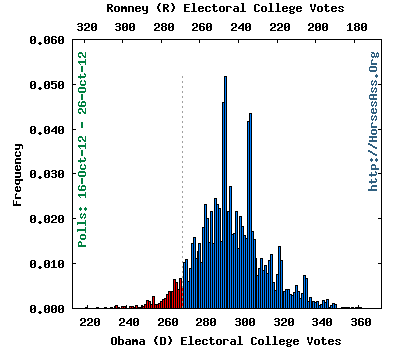