Beginning this analysis, I’ve narrowed the “current polling window.” The old window included all polls taken within the past month. That criterion resulted in some states with many “current” polls, including some pre-conventions polls.

The new criterion is three weeks, so that almost all the polling occurs after the conventions. You can expect the window to shrink to two weeks sometime in October.

There are two effects from shrinking the window. First, the number of individuals polled goes down for some states. With fewer respondents, we have less evidence and, therefore, uncertainty increases (all else being equal).

The other effect is that there is less smoothing of the results. That is, the results become more indicative of trends.

Taken together, we might expect that Governor Mitt Romney’s chances improve through the increase in uncertainty. We can also expect Romney’s chances to decrease as a result of a recent poll surge for Obama. As it happens, the latter has a much stronger effect. The net effect is that Romney takes a beating….

The previous analysis had Obama leading Romney by 331 to 207 electoral votes, and the analysis suggested that Obama would almost certainly win an election held now.

Nineteen new polls covering 13 states have appeared in the past two days. Additionally, I’ve found four older polls (one each in AL, CO, OH, and FL) by comparing my database against Samuel Minter’s database.

With this new poll, seven of eight current Colorado polls go to Obama suggesting he would win an election now with about a 95% probability. One can sense from the last three months of polling that Obama is gaining slowly in the state: 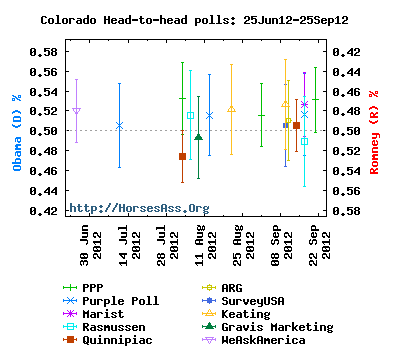 Florida has Obama up by +4% in two new polls and +5 in another. Obama has now led in five consecutive polls in the state. That trend we can almost discern in Colorado is even more apparent in Florida: 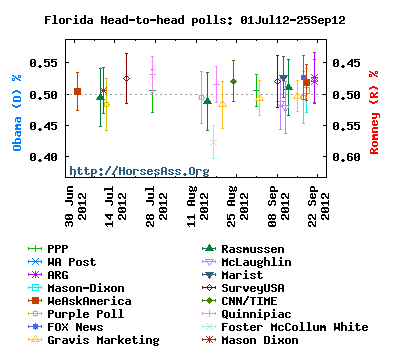 Romney took the previous Iowa poll, but this new one goes +7% for Obama. The three current polls, take together, suggest Obama has a 95% chance of taking the state right now.

Another solid Michigan poll for Obama leaves him with a certain win in the state (at least, for now). 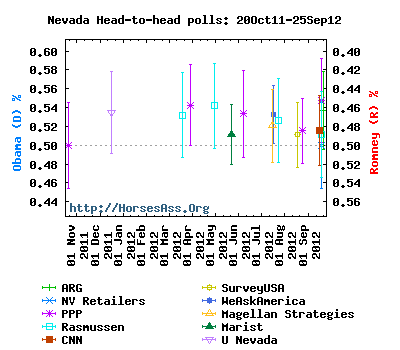 The Civitas Institute is a right wing think tank in North Carolina, but they release all their polls. This one has Obama leading by +4%. Obama leads in four of the six current polls and the last three in a row. Still, the weight of evidence goes very slightly to Romney. The trend seems to be in Obama’s favor: 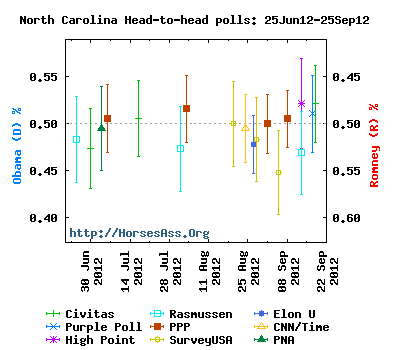 Two new Ohio polls favor Obama, one by a whisper, the other by +8%. Looking at the three month polling trend in the state, the past few weeks have not been kind to Romney: 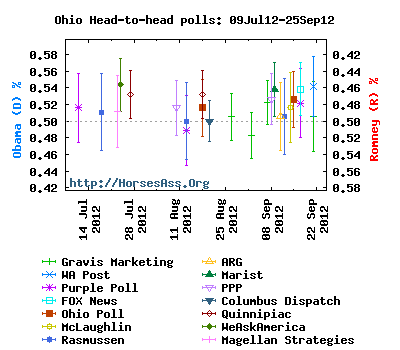 Obama gets his best and his worst poll in recent months in today’s Pennsylvania collection. Still, it is hard to argue that Obama’s lead isn’t solid: 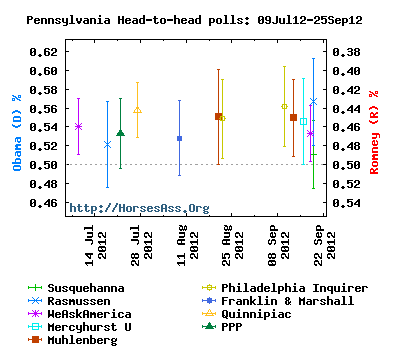 Finally, a double-digit lead for Obama in Wisconsin caps off a very favorable collection of recent polls in the state for the President. Whatever momentum Romney had in the state in August seems to have almost entirely vanished: 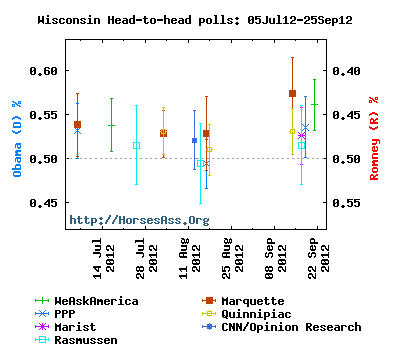 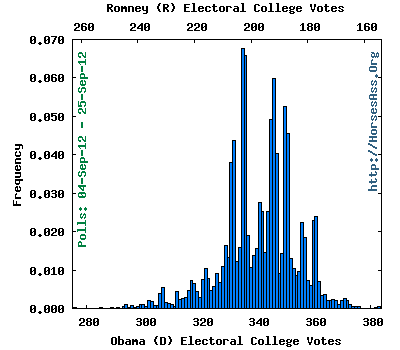