Nine new state head-to-head polls have been released in the contest between Presidential hopeful Mitt Romney and President Barack Obama since my previous analysis:

The unsurprising polls include one from Oregon that gives Obama a +8% lead over Romney, and the first poll of the year in Utah that gives Romney a +42% advantage over Obama.

Colorado puts Obama up by +3.6% over Romney. The four current polls weigh solidly in Obama’s favor, as does the overall polling picture: 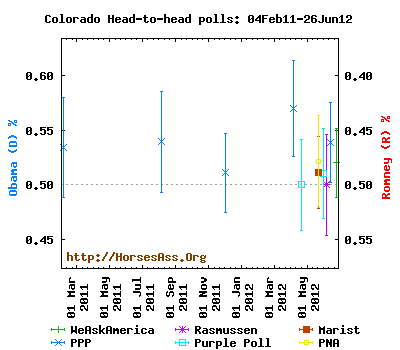 The fourth Michigan poll released in the past week has the race tied at 40% each. Combined with two other recent polls, Obama has the slightest lead in the state overall, giving him an expected 68% probability of taking the state (if the election was held now).

The second New Hampshire poll in a week has Obama up by a tight +3% over Romney. (Note that I used the Likely Voter results instead of the Registered Voter results given for this poll.) The pair of polls combined gives Obama an 81% chance of taking the state at this point.

Romney takes the most recent North Carolina poll with a weak +3% lead over Obama. That makes five leads in a row for Mitt, all since mid-May: 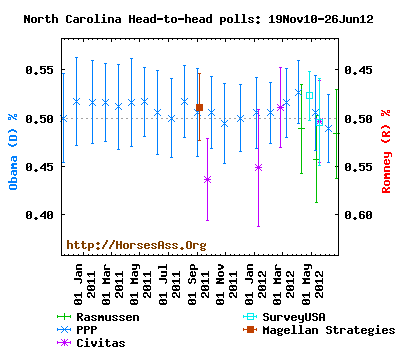 Ohio gives Obama a small +3% lead, breaking Romney’s two poll lead streak. The three current polls in that race give Romney a thin 55% probability of taking the state at this point: 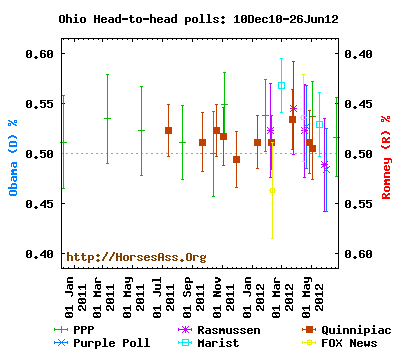 Two new Virginia polls split. One goes to Obama by +7% and the other goes to Romney by +4.7%. The weight of the evidence from the five recent polls is that Obama would take the state now with a 83% probability. 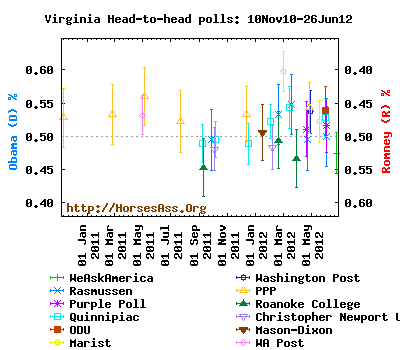 I want to again express my gratitude to Sam Minter, who does his own poll aggregation exercise. Sam systematically compared our poll databases, resolved the discrepancies, and sent corrections to me over the past month. Also, I thank the HA commenter who noticed an error in the Nebraska past elections numbers, and persisted in getting through to me when I missed his comment.

Since the previous analysis Romney has gained an expected +3 electoral votes and has more than doubled his probability of winning (now), but that works out to less than a 1% probability overall of winning. 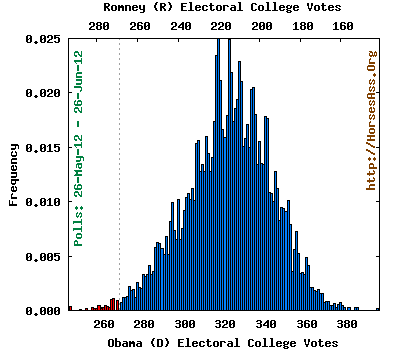