The previous analysis showed Obama leading Romney with 336 to 202 Electoral votes, and a near 100% probability of winning an election held now.

The past week has produced twelve new polls (including our first poll in D.C.) to weigh in on the contest:

(Note: This section was updated because I described the wrong poll earlier.) The new Colorado poll has Romney with a +5% lead over Obama. As it happens, this is the oldest of the three current polls in Colorado. Together they give Romney a 64% to 36% probability of taking the state in a hypothetical election held now: 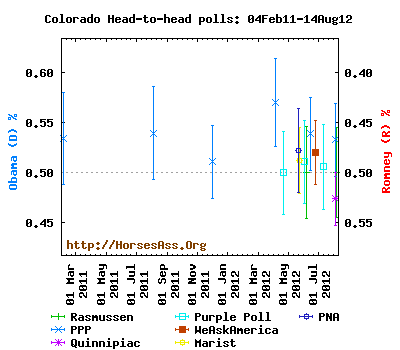 Our first poll for Washington D.C. is pathetically small at 100 respondents (it is reported as a sub-sample of a larger poll of the region). But the poll is clear…Obama is up big-time in our Nation’s Capitol.

The new Rasmussen Iowa poll offers Romney a +2% edge over Obama. As the only current poll, the analysis finds Romney taking the state with a 63% probability today. The polling suggests that the race has tightened up, so that a Romney lead is possible: 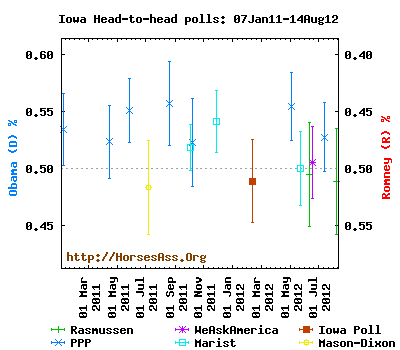 The Survey USA Missouri poll has Romney leading Obama by +1.9%. This makes 6 polls in a row with Romney leading in the state, although the other five polls had Romney up by +6% or more.

Two New Hampshire polls give Obama the lead: +6% in one and +3% in the other. Obama has now led in the past 8 polls in the state, going back three months.

Two new polls in Ohio, and one has the race all tied up at 45%, and the other poll goes for Obama by +3%. Romney has not led in the state in nine consecutive polls going back to early June. The polling history suggests that Obama’s lead is slight, but real: 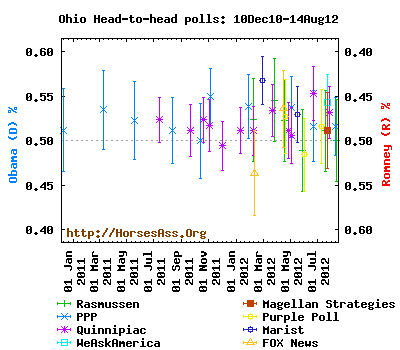 A pair of Virginia polls goes to Obama: +2% in the most recent and +4% in the other. Romney has not led in any of the seven Virginia polls taken in July and August. Like Ohio, the Virginia polling data suggest Obama’s lead is slight, but real: 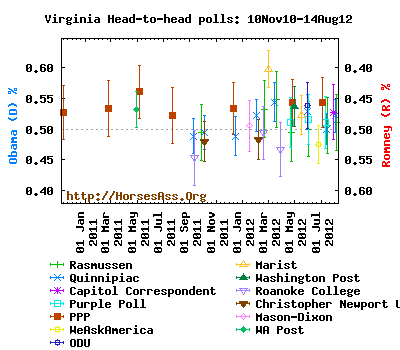 A pair of Wisconsin polls give Obama +5.4% and +6% leads over Romney. Again, we find Romney has not led in any of the seven polls taken in July and August.

Of course, a lot can happen in the 90 days until the election…. 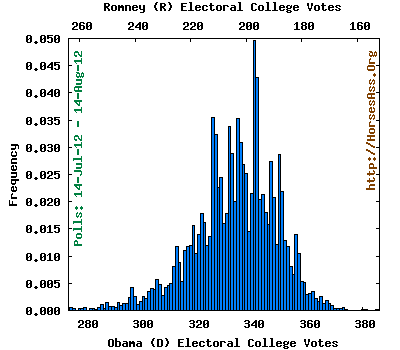