It’s about damn time! Within the last 24 hours, we have finally gotten the first new state polls of 2012, putting Obama head-to-head with Romney.

The first new one is a PPP poll from North Carolina that has Obama leading Romney by +1% (46% to 45%). The second poll, taken in Florida by Quinnipiac, isn’t quite as nice for Obama who trails Romney by -3% (43% to 46%). Obama led in the previous Florida poll taken in early December, by +7.

Obama’s chances drop from 96% in the previous analysis. 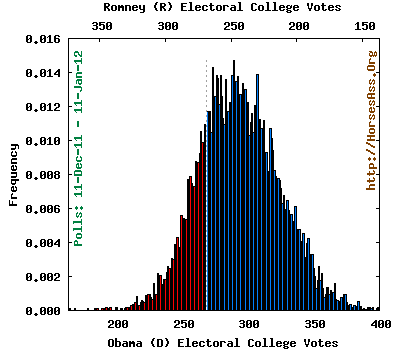