Some new polls have arrived.

Some comments on polls: First, there were a boatload of polls released by YouGov on Tuesday. If you are an Obama fan, they look pretty encouraging. Alas, I will not be including them in my analysis, as they are on-line polls. For the same reason, I will not include this Zogby poll in Florida showing Obama up +3%.

Second, there is a new New Jersey poll from Neighborhood Research on behalf of Americans for Prosperity released yesterday. It shows Obama with a +7% lead in New Jersey.

I was very tempted to totally ignore a poll from a David Koch group formed out of the Tea Party movement. But the methods section points out that:

This poll was commissioned as a public service to provide citizens with information related to public policy.

Call me a sucker, call me a fool, but until someone can show me that this was a selectively released or intentionally biased poll, I’ll follow my rules and include it.

Just a couple of weeks ago, Romney seemed on the road to building a solid lead in Colorado. Today, Obama has a +3% in two new polls, and Romney gets a +1.1% lead in another. But with nine current polls (and 5 of them in Obama’s favor), Obama ends up winning 71% of the elections in the state: 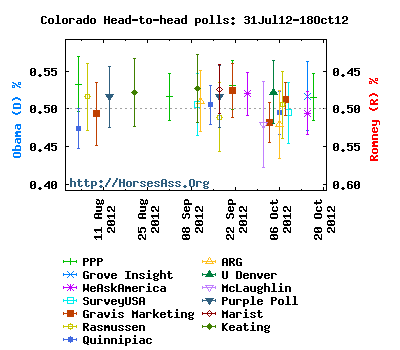 Two new polls in Iowa go to Obama, on by a remarkable +8% and the other one by an unremarkable +2.8%. Romney leads in none of the four current polls and the analysis suggests Obama would take the state with a 96% probability.

We also get two new Michigan polls. One has Obama up by a middling +6% and the other by an unimpressive +3.7%. Still, Obama takes all seven current polls, and Romney has not led in the past 20 polls…dating back to August. Obama is at a 99% probability of taking the state in an election now.

Two new Montana polls verify that Romney really does have a high single-digit lead. Romney is at 100% in the state.

Three Nevada polls all go to Obama by mid-single digits. Aside from one tie, Obama has led in the seven current polls. The polling trend seems to show Obama’s lead growing again and almost reaching his mid-September high: 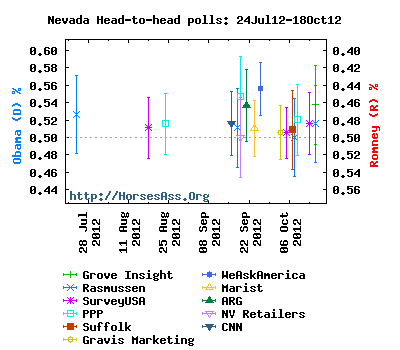 New Hampshire flipped from Obama to Romney after the first debate. Now we may be seeing it just starting to flop back. Obama takes one of two new polls, but still lags Romney in our current polls. Based on these polls, Romney would win with a 64% probability an election held now.

Romney seem to be hanging on to his lead in North Carolina with help of this new +6%. Romney takes all five of the current polls, and would be almost certain to win the state right now: 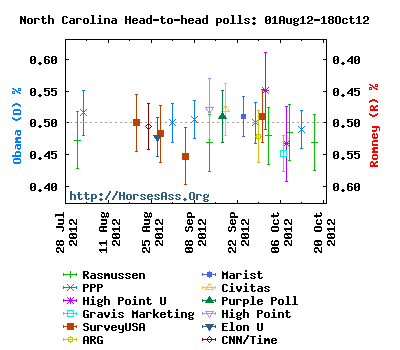 Two new polls in Ohio both go to Obama, but by pretty small margins (+1% and +2.9%). Even so, Obama has eight of twelve current polls and his series of small leads provide evidence he would win the state in an election now with an 87% probability: 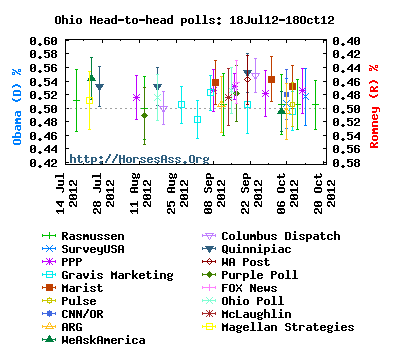 The biggest surprise of this batch of polls is that Mitt Romney finally takes the lead in one Pennsylvania poll. But, Obama leads by an equal amount in the other Pennsylvania poll, and one that is slightly larger (and newer). Overall, Obama takes seven of eight current polls, but the new one knocks Obama down to only a 92% probability of winning the state now.

Four new Washington polls give Obama leads from +5% to +14%. Combining the four current polls suggest Obama would win Washington with a probability of 100% by about +10%.

Two new Wisconsin polls both go to Obama, although one by a tiny margin. Still, with Obama up in all six current polls, it earns him a 95% probability of taking the state.

You could say that the past three days have not been good polling days for Romney. It is always dangerous to call a trend after a single analysis, but it look like the previous analysis marked Romney’s high water mark, about the same he achieved after the Republican convention.

This can be seen from a series of elections simulated every seven days using polls from 18 Oct 2011 to 18 Oct 2012, and including polls from the preceding 14 days (FAQ). See the little upward blip? 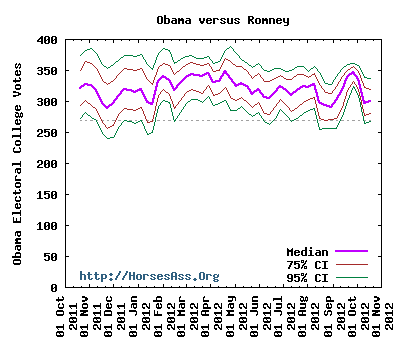 The same upward blip can be seen in the Intrade chart of median prices that I captured this morning: 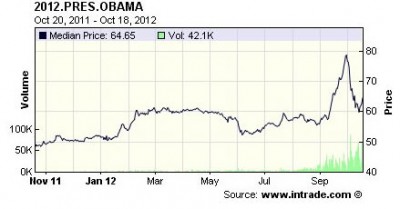 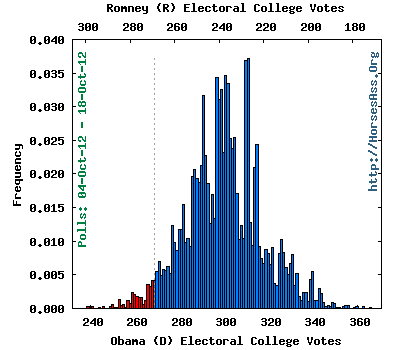