A handful of new state head-to-head polls, including two from swing states, have come out since the previous analysis. Obama leads in all five:

California has Obama crushing Romney by +29%. Massachusetts, a state Romney once governed, has Obama up by nearly as much (+21%). New York supports Obama over Romney by +17%.

In Ohio, the new poll gives Obama a slender +2% lead over Romney. Obama has led in all four Ohio polls taken this year. The polling suggests to me that Ohio may not be so much a swing state this year…. 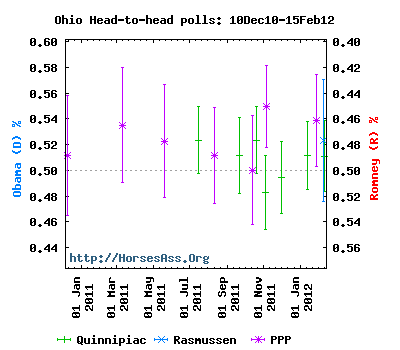 We now have our first February poll out of Florida. This one gives Obama a thin +3% lead over Romney. Obama leads in the two most recent Florida polls; Romney led in the two January polls before that.

Florida looks more like a swing state than does Ohio, but the recent trend looks favorable for Obama: 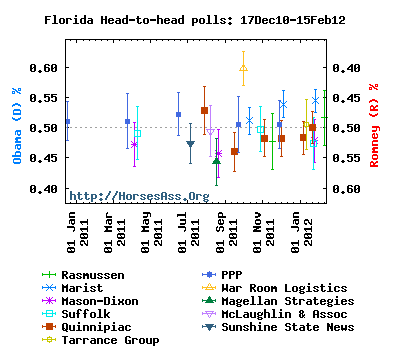 The previous analysis showed President Barack Obama leading Romney by 344 to 194 electoral votes and a probability of winning of 99.8%.

With the new polls included, after 100,000 simulated elections, Obama wins 99,989 times and Romney wins 11 times. If an election was held now, we expect Obama to win with nearly 100% probability. Obama’s average electoral vote total climbed by +4 to 348, whereas Romney’s average is now 190 electoral votes. 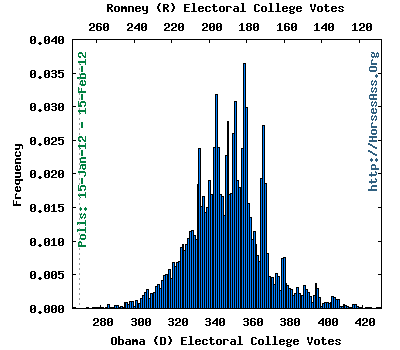