Even Newer Update: There is a real North Dakota poll that has just been released. It shows Romney leading in N.D. by 51% to 39%. The poll fails my inclusion criteria because it was conducted on behalf of the North Dakota Democratic-NPL State Party. But there you have it.

Update: OOPS! As was pointed out in the comment thread, I accidentally “invented” a new poll that turned N.D. blue! Alas, it was an Ohio poll that got entered for the wrong state (and then entered again for Ohio). I’ll do a new analysis soon.

The analysis a few days ago showed President Barack Obama leading Governor Mitt Romney by, on average, 345 to 193 electoral votes. Since then, we’ve had a plethora of new polls released, and the result is a small gain for Obama Romney.

Romney continues to out poll Obama in Arizona. The three current polls, taken together, has Romney with a 95% probability of winning the state.

In Iowa, Obama leads by +4% in one poll and trails by -1% in another. Still, there are six Iowa polls taken in the past three weeks—Obama leads in four. Together they put Obama’s probability of taking the state (now) at 98%. Here is the last three months of polling: 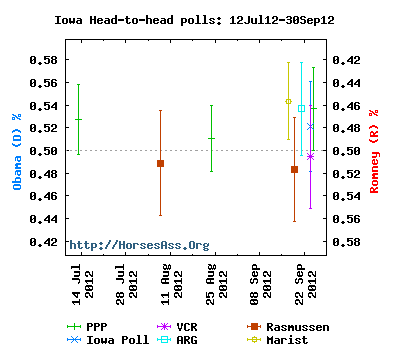 Maine has Obama leading by +12% in the new poll. There is also a newly released Critical Insights poll that is a couple weeks old and has Obama up by +16. I didn’t see the poll until after the analyses were running; it’ll be included in subsequent analyses.

Obama hangs on to a small +3.8% in one new Michigan poll. Even so, Obama pulls over 50%. Another huge, but somewhat older, Michigan poll has Obama up by +9. With Obama leading in all eight current polls, by double digits in three of them, Obama is looking unbeatable in this state.

In Nevada, Obama’s lead is just +2% in the current poll. Romney hasn’t won any of the six current polls, and Obama would be expected to win the state now with a 95% probability.

Two new New Hampshire polls have Obama up by +5% and +7%. These are Obama’s strongest showing, now giving him three of the four current polls. Romney’s chances in the state have shrunk to about 10%.

Another North Carolina poll goes Obama’s way, but by only a +2% edge. Obama now has a streak of four consecutive polls in his favor, and he takes four of the five current polls for the state. Here is what the last three months of polling look like graphically: 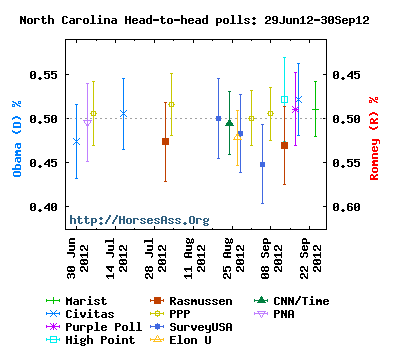 Two more Ohio polls go to Obama, who leads in all 12 of the polls taken over the past three weeks. In 2008, Obama won Ohio by +4.6%. If the election was held now, we’d expect Obama to win by more than a +6% margin! Here’s the recent trend: 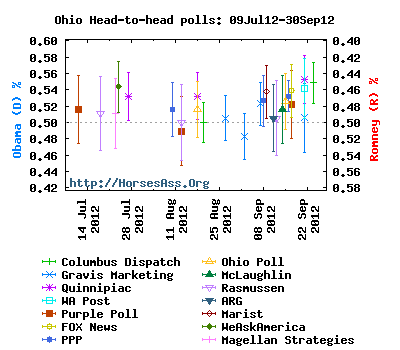 Pennsylvania shows, once again, that it isn’t a swing state. Obama’s +7% and +12% in the new polls fall in line with the rest of the ten current polls.

In Virginia, Obama has a puny +2% lead in two polls and a +6% lead in another. These polls make eleven taken in the past three weeks and Obama leads in every one of them. The analysis suggests Obama would win the hypothetical election now with certainty, even if by a smallish margin. The polling trend makes this apparent: 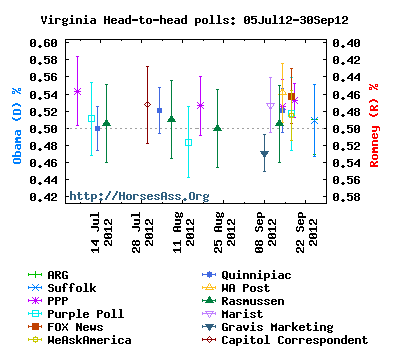 Last, but not least, we get a new Rasmussen poll in Washington, where Obama leads Romney by a solid +11%, and takes 52% of the vote. All three current polls are double digit leads for Obama…this new poll is the smallest lead.

We can view the long term trend of this race from a series of elections simulated every seven days using polls from 30 Sep 2011 to 30 Sep 2012, and including polls from the preceding 21 days (FAQ). 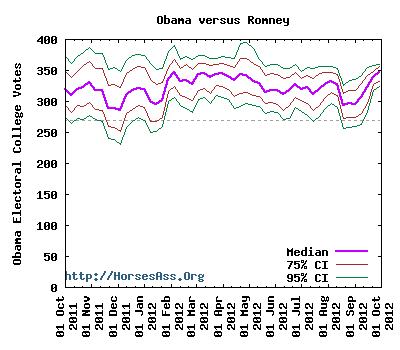 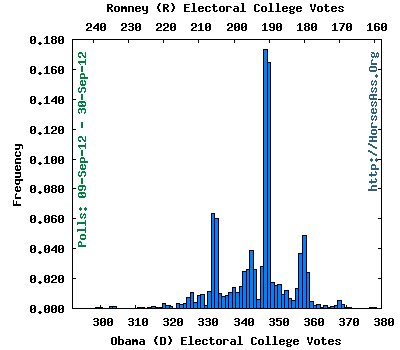