[Update: An analysis with more recent polling data can be found here.

I said in the previous analysis that a new poll was about to be released in South Carolina. It was. Unfortunately, they didn’t poll the presidential race. Too bad…now I’ll have to endure “I don’t believe the S.C. results” in comment threads and forums across the intertubes.

Folks, there was a recent very large (2100+ person) poll taken in South Carolina…and Obama led Romney. Maybe the pollster got unlucky; just maybe the lead was real. Either way, nobody will be surprised if the lead turns out to be transient.

With that off my chest, there are seven new polls released since the previous analysis:

Two swing states weight in. Ohio gives Obama a slender +4% lead. This means Obama has led in all three Ohio polls taken this year. And in Pennsylvania, Romney has a slenderer +2% lead. Nevertheless, a Keystone poll taken a couple of weeks ago had Obama leading 41% to 30%. Since both polls are considered “current” [FAQ], they are pooled and Obama ends up on top…for now.

The South turns in a couple of pleasant surprises for Team Obama. In Virginia, Obama is up by +4% over Romney. The only other Virginia poll taken this year also has Obama up (+1).

North Carolina seems to be leaning toward Obama (+1%). There are two other NC polls taken this year. A recent Civitas poll has Romney up +9. I should point out that Civitas is a conservative think tank, but their polls were okay in 2008. An early January PPP poll in NC had Obama up by +1. But only the two most recent polls are considered “current”, so Romney leads in North Carolina.

The previous analysis found Obama with a 99.6% probability of winning an election held then, and a mean of 335 electoral votes to Romney’s 203.

With the seven new polls included, a Monte Carlo analysis of 100,000 simulated elections gives Obama 99,804 wins and Romney 196 wins (including the 21 ties). That suggests Obama has a 99.8% probability of winning an election held now. On average, Obama gains nine additional electoral votes: 344 to Romney’s 194. 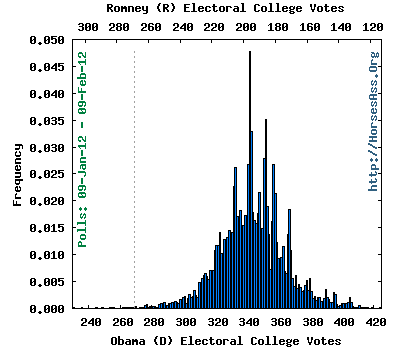