A new Elway poll has Washington state AG Rob McKenna leading former WA-1 Congressman Jay Inslee, 47% to 45%. The poll comes on the heels of a Strategies 360 poll showing the race tied up. The Elway poll surveyed 451 likely voters (4.5 MOE) from 18 Oct to 21 Oct. 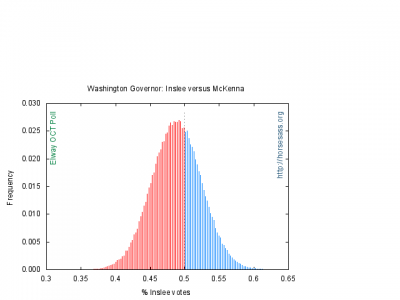 This new poll is one of five recent (October) polls trying to assess this race, and they largely overlap:

If you believe the dynamics of this race have not changed much over the several weeks, then a pooled analysis of the five polls can provide additional evidence of the state of the race. 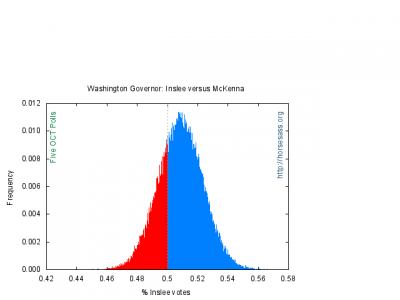 It’s hard to say which of these two analyses better reflect the dynamics of the race. But, it would be naive to deny that this race has tightened up in the past few weeks.

The Elway poll has a pretty small sample, which means there is more sampling error; but, combined with the Strategies 360 poll, it is perfectly justifiable to suggest that McKenna is really in the lead now.