Elway released a new poll today for the Washington state gubernatorial race between A.G. Rob McKenna (R) and Rep. Jay Inslee (D-WA-01). The poll surveyed 405 registered voters (M.O.E. 5%) and was conducted from the 7th to the 9th of February.

Here is the distribution of electoral outcomes from the simulated elections: 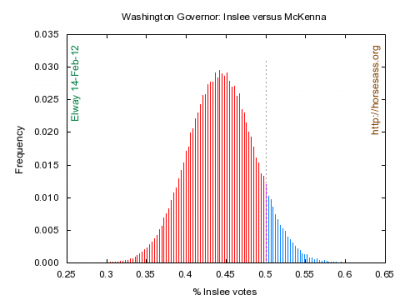 This makes the fifth poll in a row that McKenna has led Inslee—his lead can no longer be explained by chance. The previous poll, taken in mid-January, had McKenna leading Inslee 46% to 43% and with a 71.5% probability of beating Inslee. In fact, Inslee last led in a SurveyUSA poll taken last June.

The most recent analysis for the Inslee—McKenna race can be found here.