My analysis yesterday showed President Barack Obama leading Governor Mitt Romney by a mean of 309 to 229 electoral votes. Obama would be expected to win an election now with an 98.9% probability and Romney, 1.1%.

Today I found a pack of 29 polls that cover 17 states. The polls have something to celebrate for the Romney camp—ties in a New Hampshire and a Pennsylvania poll, a small lead in a Michigan poll, and a lead in the only Florida poll. But the Obama camp has some celebrating of their own, including leads in three Ohio polls, leads in three of four Pennsylvania polls and, perhaps most importantly, solidifying his formerly tenuous lead in Virginia with two more leads in VA polls.

Altogether…it’s a wash. The expected electoral votes are split identically. Romney’s probability of winning an election goes up ever so slightly, however.

Here are the polls:

The only Florida poll puts Romney over Obama by +2%. Romney now has four of the five current polls, and an estimated 74% probability of taking the state in an election held tonight.

Iowa has Obama up by +2% in a new poll. This state is looking like a lock for Obama. He has led in seven of the eight current polls. Even if the margins are small, the simulation gives Obama a 97% probability that his overall +3% lead is real.

In Michigan, Obama leads Romney by +6% in one new poll, and Romney leads Obama by +0.7% in the other. And that second poll is a monster, with over 1,900 respondents. Putting the five current polls together, Obama is down to a +2.8% lead and a 90% probability of taking the state now.

A new Minnesota poll has Obama leading by a comfortable +11%, a margin that when combined with two more modest margins in the current polls suggests an almost certain win. I might not have even mentioned this poll, except that, in the previous presidential poll analysis thread, Serial Conservative pointed out a Minnesota poll that had Romney up by +1% in the state! He did add the point: “Not sure whether this meets the qualifications for inclusion in Darryl’s analyses.”

So, I dutifully investigated (were it a weekday, I would have called the pollster). This poll was done for American Future Fund, a 501(c)(4) organization that has a long track record of producing and airing factually challenged anti-Obama ads. That isn’t a good start. But what I found is a record of candidate polls being released. That makes it pretty certain that the MN poll was released selectively.

Why does it matter? Consider this. Suppose some 501(c)(4) hit machine hires Mr. P to do 20 polls over several months in a race between Ms. D and Mr. R. And Mr. P is a scrupulous pollster. As it happens, the first 19 polls showed Ms. D leading by margins of +6 to +11. But, just because of the sampling variability in polling that 20th poll comes in with Ms. D up by only +1%. Mr. P’s client releases the poll to show how competitive the race is—good strategy, bad statistics. Of course, the race isn’t close. The client got one of those one-in-twenty results for a race that is really about Ms. D+8%. Mr. P hasn’t done anything wrong. But the released poll suffers from selectivity bias because the other 19 polls were not also released. Releasing only the Ms. D+1% poll is completely misleading as to the actual state of the race.

Oh…yes, New Hampshire gives us two new polls. One has Obama up by +2% and the other is a tie. Obama takes the other three current polls by mostly narrow margins. Obama would win the state with an 88% probability in a race this evening.

Another day, another sprinkling of Ohio polls. All three go to Obama by smallish margins. Obama leads in seven of nine current polls, and there is one tie. The evidence is overwhelming, suggesting Obama would win an election now by a 98% probability.

Suddenly there is interest in Pennsylvania! Of the four new polls, Obama leads in three, and one is a tie. The four current polls (all added today) combine to give Obama an 89% probability of winning the election now.

The big surprise is the new set of polls from Virginia. One gives Obama a +1% lead, and the other a +4% edge. This solidifies the slight lead in the state that Obama took yesterday. The three current polls now have Obama’s chances at a 77% probability of taking the state.

Obama just squeaks by in two new Wisconsin polls (+1% and +3%). The collection of six current polls (one tie and five Obama leads) have Obama with a 97% probability of winning the state now. 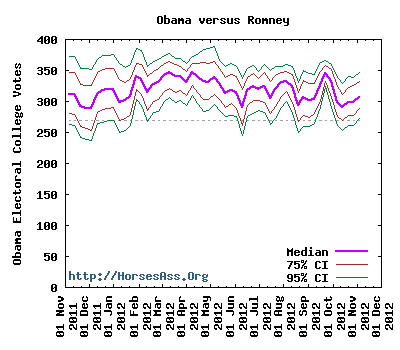 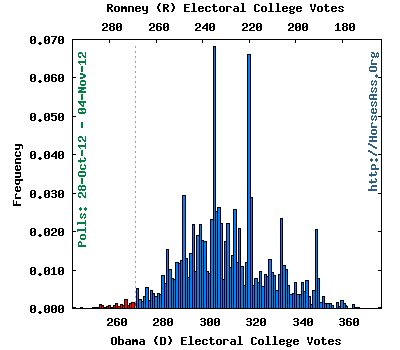