Yes another poll has been release in the WA gubernatorial contest between former Rep. Jay Inslee and Washington AG Rob McKenna. This one is the Washington Poll. The poll surveyed 644 likely voters from October 1 to October 16.

A Monte Carlo analysis using a million simulated elections, using only data from this new poll gives Inslee 555,393 wins to McKenna’s 432,729 wins. This suggests that, if the election was held now, Inslee would win with a probability of 56.2% and McKenna would win with a 43.8% probability.

Here is the distribution of election outcomes: 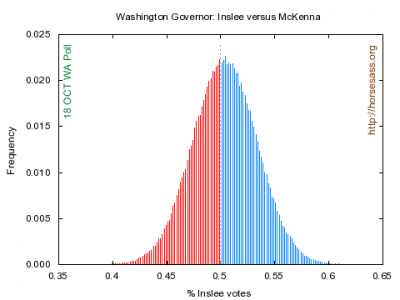 Given that we have three polls that are either consecutive or overlapping, lets look at what they have to jointly say about the state of this race.

Jointly, the polls suggest that in an election right now, Inslee would win with a 83.9% probability to McKenna’s 16.1% probability. Here is the distribution: 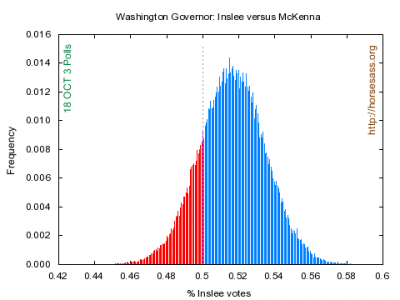 By standard statistical inference, Inslee’s lead isn’t quite “significant.” But the larger polling trend shows that Inslee holds a small, but consistent lead over McKenna: 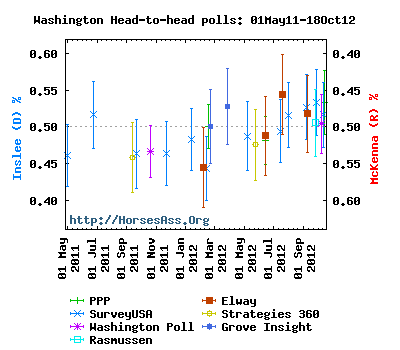 Note: This post was originally written using the numbers for Registered Voters, simply because I hadn’t noticed that results for Likely Voters was available. I subsequently reanalyzed the data and rewrote the post to reflect the Likely Voter numbers. I regret the error…because, man, was that a pain in the ass!