Update: As Richard Pope points out in the comment thread, the numbers in the post didn’t match the headline. The headline is correct. I screwed up typing Inslee’s number into a database, and the error spread from there. All fixed now.

A new poll is about to be released in the Washington gubernatorial race between Rep. Jay Inslee (D-WA-01) and state Attorney General Rob McKenna. The poll surveyed 532 registered voters and was conducted on behalf of KING 5 by Survey USA. KING 5‘s Robert Mak gives a brief overview of the results. 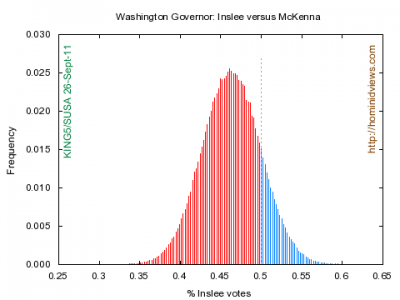 The results suggest that, if the election was held today, McKenna would win with a 98.9 86.3% probability. Note that since McKenna’s probability of winning is less than 95%, the lead is not considered “significant” by traditional statistical reasoning.

It is, of course, too early to panic over this poll, particularly with 24 18% undecided. Nevertheless, this poll puts McKenna in the lead. Last week a poll from Strategies 360, a Democratic consulting firm, showed a similar lead for McKenna, 46% to 39%. I generally ignore polls from partisan consultants or polls commissioned by campaigns, but the similarity in results is noteworthy. The previous “real” poll for this race was from Survey USA in late June and showed Inslee with a small, non-significant lead over McKenna, 47% to 44% (my analysis is here).

Mac points out for today’s poll:

McKenna’s early lead can be attributed in part to his strength in the Puget Sound area. In King, Pierce and Snohomish counties, he’s even with Inslee at 41% each, which is significant for a Republican candidate. As expected, McKenna picks up votes in more conservative eastern Washington with a 59%-25% advantage.

Inslee has, apparently, lost ground to McKenna on both fronts: in June he was up 49% to 42% in Seattle and McKenna was up 51% to 41% in eastern Washington.

This race is being touted as the hottest Governor’s race in the country, and the best G.O.P. gubernatorial pick-up opportunity in the nation. It’s certainly living up to the hype!