Yeah, yeah, yeah, I know, it is really early. And yeah, the polls don’t mean much now. Blah, blah, blah.

Ya know, the score in a basketball game doesn’t mean much after the first 5 minutes either, and yet there is that score in the corner of the screen. So if you don’t want to see the score, go away…now.

What’s the score, you ask, in the gubernatorial race between Rep. Jay Inslee (D-WA-01) and Attorney General McKenna (R-WA) race? Five minutes into the game, Inslee is up slightly. The score is based on a SurveyUSA poll of 515 registered Washington voters taken from 24 Jun to 26 Jun.

The final tally gives Inslee 687,927 wins to McKenna’s 300,837 wins. This suggests that, in an election held now, Inslee would have a 69.6% chance to McKenna’s 30.4% chance of winning, simply based on the evidence from this one poll. Here’s the picture of all outcomes from the simulated elections: 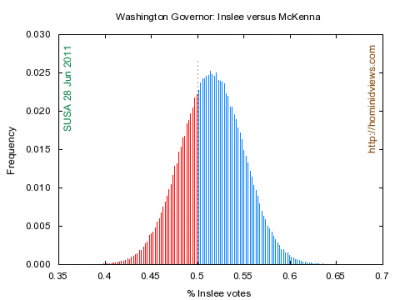 This is the second poll from Survey USA in this race. The early May poll had McKenna leading Inslee by +7 (48% to 41%) before either had declared their candidacy. If the election had been held back then, McKenna would have won with a 90% probability. Some difference a month and a half makes!