Sen. Marco Rubio is one of three major G.O.P. candidates out of Florida (along with Jeb Bush and Mike Huckabee). This should provide him with a general election advantage of providing a strong showing in this important swing state. The most recent Florida poll, taken in the second week of August, has Rubio leading Hillary Clinton by +12.

In fact, Rubio leads in the most recent polling in the other two classic swing states of Ohio (+2) and Pennsylvania (+7). It hasn’t always been that way. For the past year, Clinton has generally held solid leads in all three swing states, only to lose all three leads over the summer: 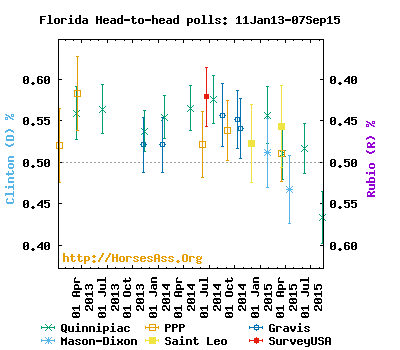 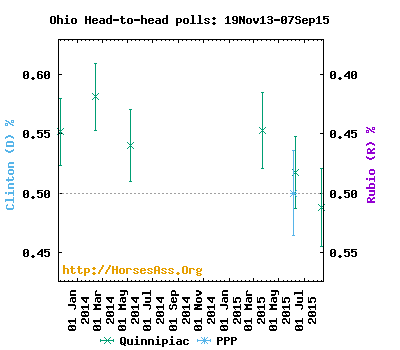 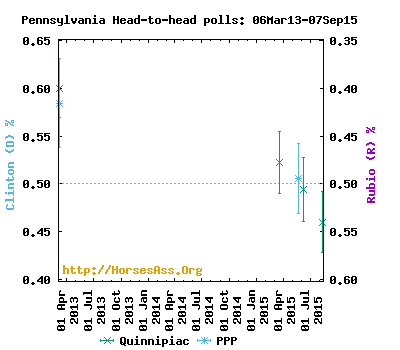 So how is it that Clinton can be behind in these three swing states and still lead? It’s because she leads in Wisconsin (+12), Virginia (+1), Texas (+1), Louisiana (+3) and Georgia (+3). Virginia is the only state with a recent poll. Of states with older polls, Wisconsin is at least plausible, but Texas, Louisiana and Georgia seem unlikely to swing blue in 2016.

Clearly, much more polling is needed to get a feel for where the race is at. Clinton has certainly lost ground over the summer, and this is probably a function of two things. First, voters are familiarizing themselves with, and getting used to the idea of voting for Marco Rubio. Second, Clinton has had a terrible summer from the perspective of national popularity. For most of the summer, what news we’ve heard about Clinton, has been largely negative.

The Clinton campaign has been disconnected from a general election audience, as her campaign focuses on another important aspect of the race. They have spent the summer quietly locking up superdelegates, almost guaranteeing her the Democratic nomination. The trade-off for a lousy summer is that the campaign will be freed up early to focus on the care and feeding of general election voters while the Republicans bludgeon their way through an unappealing primary.

Republicans have a very different nomination structure, they don’t have superdelegates, and the dynamics of their over-populated primary are entirely different, so that campaigns have spent the summer attempting to maximize positive news cycles (or, in the case of Donald Trump, positive or negative news cycles). This has allowed the top contenders to “catch-up” to Clinton and, given some more recent polling, possibly top her. 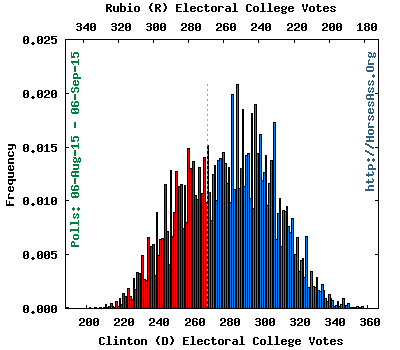 The long term trends in this race can be seen from a series of elections simulated every seven days using polls from 06 Sep 2014 to 06 Sep 2015, and including polls from the preceding 1month (FAQ). 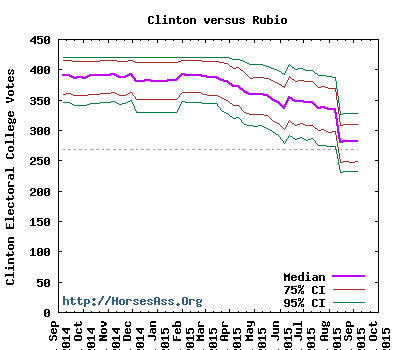