As I briefly mentioned earlier today, we got a new Rasmussen Poll in the race between Sen. Patty Murray (D) and Dino Rossi (R). The poll shows Murray leading Rossi 51% to 46%. The poll surveyed 750 likely voters on the 14th of September.

With this new poll, we have now had seven polls taken (and released to the public) over the past month:

In what follows, I’ll ignore the DSCC poll. Not that I have any reason to doubt the poll. Rather, the poll was specifically released because the results favored Murray, thus clearly violating a statistical assumption used for the analysis.

Murray leads in four of the remaining six polls. As usual, I’ll begin with a Monte Carlo simulation analysis of the most recent poll (FAQ). Taking just the new Rasmussen polls there were 728 respondents who went for Murray or Rossi. Following a million simulated elections, Murray tallies 835,577 wins to Rossi’s 158,253 wins.

The evidence offered by this most recent poll suggests that Murray would have an 84.1% chance of beating Rossi if an election had occurred two days ago. Here is the distribution of outcomes from the simulated elections: 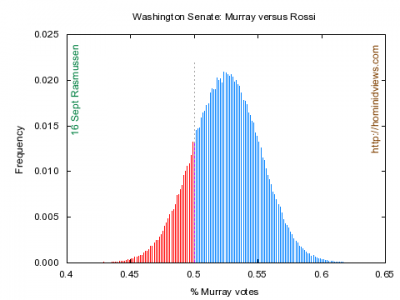 Thus, these three polls offer evidence that Murray would have a 99.5% chance of beating Rossi in an election held over that past week.

If the past month of polling is representative of Washington state voters, the evidence suggests that Murray would win an election held now with a 93.5% probability.

Going back a month or two things did not look nearly so rosy for Murray. This is clear from a graph of the polling in this race: 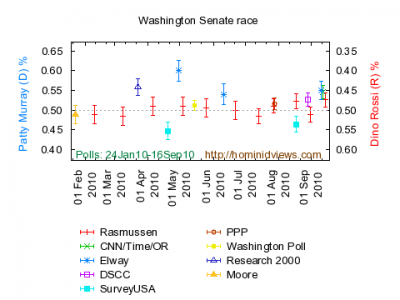 See that dip that occurs over the summer? When the early September Rasmussen poll came out showing Rossi leading Murray 48% to 46%, I offered a theory:

There is another reason I am not (yet) too concerned. August 31 is still in the “dog days of summer” around here. In my many years of following polling in Washington state, I’ve learned that Washingtonians become very negative in the summer, only to perk right back up in the fall. I can’t really explain it…I’ve just observed it in approval numbers. Murray probably gets the worst of if from the summer malaise. That is, Murray doesn’t really have to worry about close results like these for another month….

I’m such a pessimist…it only took a couple of weeks.