There are two main arguments against seeking new revenue to help close the current budget gap.  The first—that an economic downturn is exactly the wrong time to raise taxes—comes down to an argument over economic philosophy, and it is certainly reasonable to debate the anti-stimulus impact of tax hikes versus the anti-stimulus impact of reduced government spending… the cost in human suffering aside.

But the second argument—that our current budget crisis is largely due to out-of-control spending, and thus should be solved by slashing the same—well, that ultimately comes down to facts… facts that upon close evaluation, simply don’t support the thesis.  In fact, as I’m about to show you, far from ballooning, Washington state government tax revenues have actually shrunk over the past 15 years, when adjusted for population growth and inflation.

The heart of the out-of-control spending argument comes from the simple fact that the state’s “near general fund” spending jumped from $25.6 billion during the 2003-2005 biennium to about $32.6 billion for the 2007-2009 biennium that ends in June… an undisputed 27.2 percent increase over four years.  (Or so says the conservative Washington Policy Center.)

That’s a big jump, and it doesn’t take a spreadsheet jockey to intuit that it far outpaces population growth or inflation or even overall growth in the state economy over same period.  During last year’s gubernatorial campaign, Dino Rossi repeatedly argued that such spending growth was unsustainable, and he was right.  That’s why nobody was arguing to sustain such growth rates.

In fact, the jump was an anomaly made possible by a spurt of real estate bubble fueled revenues, and largely exaggerated by the fact that the starting point, the 2003-2005 budget, embodied a substantial dip in both revenue and spending growth as the state struggled to recover from the previous recession.  Spending did jump 27.2% during the first Gregoire administration, but only relative to the low point that immediately preceded it.  This four-year snapshot may have been useful to Republicans for rhetorical purposes, but it doesn’t take into account population growth or inflation, and it hardly says anything about long term budget and revenue trends.

So, if the anti-taxers are going to argue that the current budget crisis is the result of out-of-control spending rather than a revenue shortfall, let’s take a look at long term tax revenue trends, and see what the data tells us.  And since the TABOR crowd absolutely insists that population plus inflation is the proper metric for limiting growth in government, let’s start by tracking state tax revenues over time, and adjusting as such. 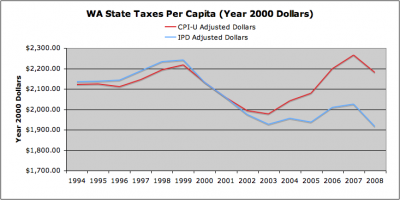 The chart above tracks WA state government tax revenues per capita over the 15 year period between 1994 and 2008, indexed to year 2000 dollars.  The red line tracks per capita taxes, adjusted for the commonly used Consumer Price Index All Urban Consumers (CPI-U), while the blue line tracks per capita taxes adjusted for the Implicit Price Deflator for State & Local Government Consumption (IPD).  Tax revenue and population totals were drawn from US Census Bureau data.  And for those doubting my math, you can download my spreadsheet here.

As you can clearly see, even using the less applicable CPI-U index, per capita state taxes in Washington have remained relatively flat over the past fifteen years, ranging from a low of $1,978.42 in 2001 to a high of $2,265.47 in 2007, and currently hovering damn near its fifteen-year average.

But as I’ve previously explained, the CPI is the wrong measure for tracking the growth in cost of government, as the highly-educated, labor-intensive services governments tend to provide (doctors, nurses, teachers, etc.) do not benefit from the same sort of productivity gains that technological advances have bestowed on economic sectors such as manufacturing.  That’s why the IPD is widely accepted as the most accurate measure of inflation, even by the conservative Heritage Foundation, which insists that “the IPD measures inflation more accurately than the CPI.”

The US Bureau of Economic Analysis also breaks down the IPD into various economic sectors, and it is per capita state taxes adjusted by the IPD for State and Local Government Consumption that is tracked by the blue line… data which clearly shows even the 2005-2007 jump in revenues as nothing more than a spike in a trough, and our 2008 revenues having come in at a fifteen year low.

The trend is clear even adopting the anti-tax frame: adjusted for population growth and the most accurate measure of inflation for the types of products and services governments consume, state tax revenues have consistently trended down over the past fifteen years. And that’s before the dramatic drop in revenues resulting from the current economic crisis.

Quite simply, Washington state suffers from a long term structural budget deficit, that while masked by the good times and exacerbated by the bad, continues to drive down per capita revenues in real dollars over time.  Even the conservative Tax Foundation, Tim Eyman’s think tank of choice, shows WA’s state and local taxes plummeting from 10.4% to 8.9% of personal income over the past 15 years, ranking us dead even with Mississippi.

So where is the evidence of a state government out of control?  Apart from a four-year snapshot taken entirely out of economic, demographic and historical context, there is none.  Zero.  Zip. Nada.

Our economy will eventually recover, but unless we address our long term revenue deficit, our state government will emerge smaller than it was before the crisis, and its ability to provide services and invest in infrastructure will continue to shrink over the decades hence.