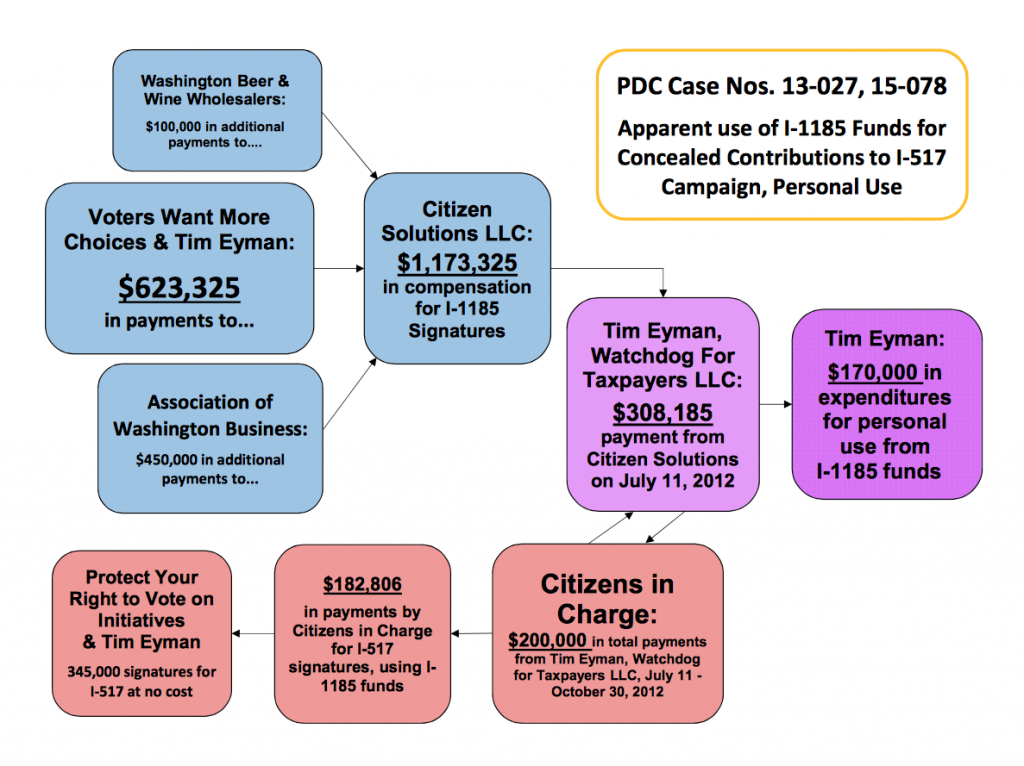 Commissioners will meet on Thursday to consider the staff recommendations. Given that Eyman is accused of laundering hundreds of thousands of dollars for both personal and political use, and that the PDC’s penalty authority is capped at a mere $10,000 fine, the Commission will almost certainly accept staff recommendations. And no, I’m not using the word “laundering” recklessly—that’s pretty much what the PDC report describes. (Other words that come to mind are “wire fraud,” “mail fraud,” “kickbacks,” and “bribery.”)

And that’s just during 2012. For me, the most gratifying finding in the staff report is the conclusion that these kickbacks had likely been going on for years:

… on multiple occasions between 2004 and 2011, after paying hundreds of thousands of dollars in committee funds to Citizen Solutions to qualify his initiatives for the ballot, Mr. Eyman then sought and received payments back from the firm ranging from $5,000 to $100,000 per campaign.

Which is exactly what I concluded back in 2006 when I wrote: “I’ve always suspected that Eyman has a financial stake in Citizens Solutions, or receives some kind of monetary ‘consideration.’” And it wasn’t a lucky guess. We knew that Eyman’s campaigns were substantially overpaying for their signatures. This was the only logical explanation why.

Corrupt, obviously, but illegal? Well, imagine you are a manager at a public agency or private corporation, and you extract personal payments from a vendor in return for awarding contracts. That is certainly illegal. Whether Eyman has the same legal fiduciary responsibility to the people funding his campaigns as he would to an employer, I don’t know. But there’s little question he’s violated the law in covering these transactions up.

My hope is that Attorney General Bob Ferguson throws the book at Eyman and extracts a felony plea at the very the least (under RCW 42.17A.750). I’m not so interested in sending Eyman to prison as I am in ending his corrupt for-profit initiative business, but I’d also encourage federal prosecutors to take a look at the evidence as well: For if in fact he used payments from Citizen Solutions, and to Virginia-based Citizens in Charge, to illegally cover up the I-517 money trail, then Eyman may have violated federal law too.

A civil fine, however large, clearly isn’t enough to force Eyman to obey the law—he paid a $55,000 fine in 2002 and didn’t miss a beat. A criminal conviction may be the only way insure the integrity of our public disclosure system.