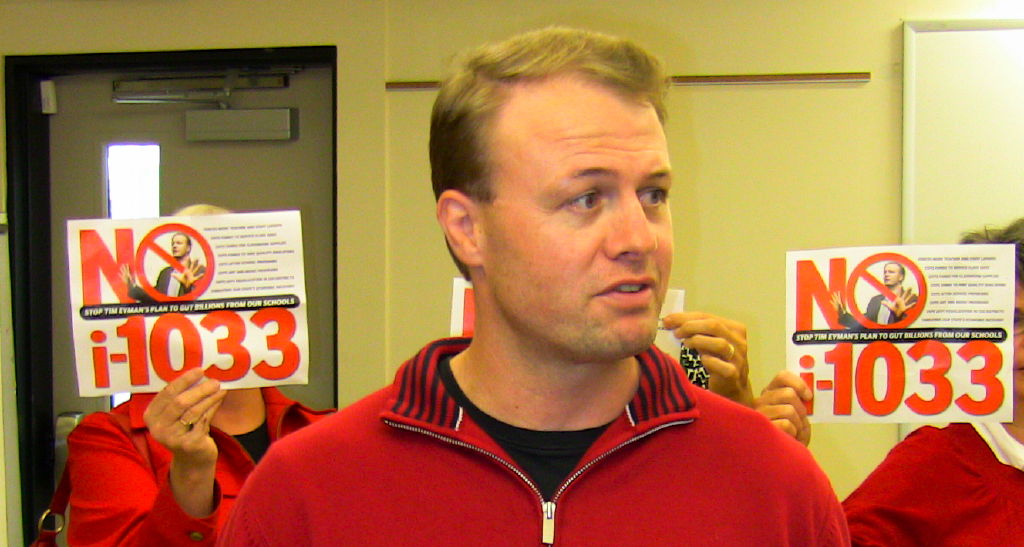 Tim Eyman is a horse’s ass.

Three years ago I brought to my editors at The Stranger a scoop detailing the undisclosed funding of one Tim Eyman initiative with money raised from another, and they were so concerned about the seriousness of the allegations (I was accusing him of, you know, breaking the law), that they took the somewhat rare step of vetting the piece with the paper’s attorney before publishing. I was never concerned about libeling Eyman because the case I was making was so well documented, but regardless, I joked to the attorney at the time, Eyman would never sue anybody for libel out of fear that legal discovery would expose how much money he was secretly making on kickbacks from his favored signature gathering firm, Citizens Solutions.

Voters Want More Choices, the Eyman-led political committee behind I-1185, paid Citizen Solutions nearly $623,000 between April and July 2012, according to court records. Overall, the firm earned $1.2 million for its efforts to get I-1185 on the ballot.

In July 2012, Citizen Solution paid $308,000 to Eyman’s [private company] Watchdog for Taxpayers. Eyman told the PDC that he was paid to find new clients for the firm.

That same month Eyman loaned $190,000 to Citizens in Charge which used it to pay for gathering signatures for I-517, according to court records.

Neither the payment nor the loan was reported to the Public Disclosure Commission, according to court documents.

I don’t know that there’s anything inherently illegal about Citizen Solutions paying Eyman $308,000, as long as he declares it on his taxes. It’s his failure to fully disclose I-517’s transactions that led to this investigation.

But given the unusually large gap between what the signature gatherers on the street say they’re being paid and the inflated cost of Eyman’s signature drives, it is fair to speculate that this isn’t the first or only payment that Eyman has received from Citizen Solutions. In fact, I publicly speculated exactly that way back in June, 2006:

I have another theory which, lacking the subpoena power to open up the private books of Eyman and Citizens Solutions I cannot possibly prove, but… I think Tim’s ripping off his patron, Woodenville investment banker Michael Dunmire, who’d already contributed $307,700 to I-917 through the end of May.

[…] Again, I can’t prove it, but I’ve always suspected that Eyman has a financial stake in Citizens Solutions, or receives some kind of monetary “consideration”, and while none of this may be illegal it is certainly dishonest. Something is just not right here, and knowing Timmy, I can’t help but suspect that he’s cooking the books for personal gain. Again.

Nine years later the Attorney General finally used his subpoena power to open up Eyman’s books on I-1185, and he found exactly what I predicted. And considering the inflated costs Eyman has paid over the years for printing and mailing, I wouldn’t be surprised if he earned “monetary considerations” from that too. We’ll never know for sure (unless he sues me for libel), but Eyman’s probably made several million dollars this way from his initiative campaigns over the years.

Ever since he emerged on the scene Eyman has gone to great pains to deny that he earns anything off his initiative campaigns. At first, he just plain lied about it. Then, he concocted this byzantine web of campaign committees and vendors and private corporations to cover up the money trail.

Of course, as long as you disclose it, it’s neither illegal nor unusual to pay oneself to run an initiative campaign. So why does Eyman hide it? I’m guessing because if his backers knew he was skimming 25 percent right off the top, they might have the common sense to cut out the middleman. And that would mean the end of Tim Eyman’s lucrative “volunteer” career.